The Euro took a big knock on Monday in Asia following Italian Prime Minister Matteo Renzi’s decision to resign in the wake of a referendum defeat.

Mr. Renzi said that voters had shown a “clear” rejection of the legislative reforms on which he had staked his political future.

“My experience of government ends here,” Renzi said in a televised address as the results showed that his “Yes” camp was going to lose.

Sunday’s vote was on whether the country’s second chamber should lose some of its powers. Legislative delay has long hamstrung attempts at economic reform in Italy and the new rules would have made it necessary for new laws to pass only the lower house to get onto the statute book.

However, the opposition to the vote claimed that the new provisions would have led to a concentration of power. The main issues for markets are the question of whether Italy can possibly reform fast enough to boost its struggling economy, and the increasing power of a populist vote which could threaten the country’s membership in the Eurozone.

One of the most visible signs of that economic struggle is the banking sector. There the largest banks reportedly hold a combined $300 billiion of bad loans, debt securities and off-balance sheet items, wreckage of the Eurozone’s financial crisis which has yet to be cleared away.

Worries about this have seen equity prices in the sector fall by nearly 50% this year.

News that Austria’s far-right candiate for President – an arch euroskeptic – had been defeated by the more pro-EU alternative might have supported the Euro a little. Norbert Hofer conceded defeat to the Green Party backed Alexander Van der Bellen. However, the Italian vote was always the bigger deal for markets and the single currnecy has duly swooned. 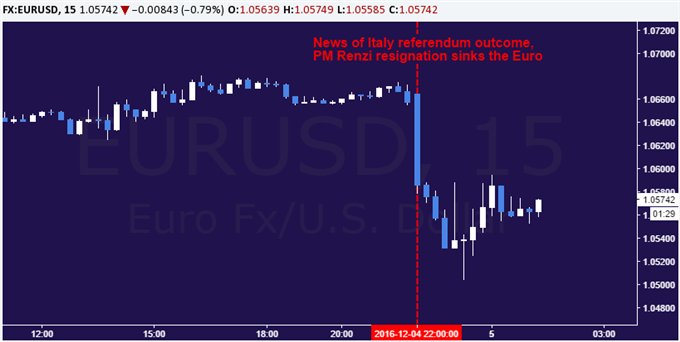 Please take a look at our schedule of upcoming webinars and join us to follow the financial markets live!