- The SNB is highly unlikely to announce additional stimulus when it meets on December 15.

- EUR/CHF rallied yesterday but has quickly lost its gains.

Weak Swiss GDP data surprised markets Friday morning, coming in flat at 0.0% in Q3’16, after rising +0.6% in the previous quarter. The print was significantly below market expectations of an expansion to 0.3%. Growth was also down year-on-year, slowing to +1.3% from +2% in Q2, again missing forecasts of a +1.8% rise on the same period the previous year, according to the State Secretariat for Economic Affairs Friday.

The fall in Swiss GDP – this is the weakest performance in more than a year – bears out recent warnings from the Organization for Economic Cooperation and Development of the rising likelihood of Switzerland feeling the ill-effects of negative rates. However, the Swiss Bank last week said that it plans to keep interest rates in negative territory (they’ve been at a record low of -0.75 since November 2015) for the foreseeable future to prevent the franc from appreciating too far: Switzerland relies heavily on exports and it needs a weak currency so it’s not priced out of international markets.

Rates are therefore highly likely to stay where they are when the Swiss National Bank meets for a policy update on December 15. Indeed, the OECD said the Swiss authorities would need to adopt ‘macro prudential’ measures if it wants to stoke inflation.

There are also a plethora of political risks in the Euro-Zone approaching, such as Sunday’s Italian referendum and elections in Austria (also on Sunday), the Netherlands, France and Germany, that are set to put pressure on the Euro and keep the franc strong.

This is the likely reason that the EUR/CHF failed to maintain its rally yesterday, made on the back of a report that suggested the European Central Bank would extend its bond-buying program to March – as widely expected – but also signaled the program would eventually be tapered out. This was initially taken as Euro-positive, but the Euro remains in a bearish trend and liable to volatility owing to these said political risks. The Euro was unable to sustain its rally against the Swiss Franc and was last seen back at 1.0751. 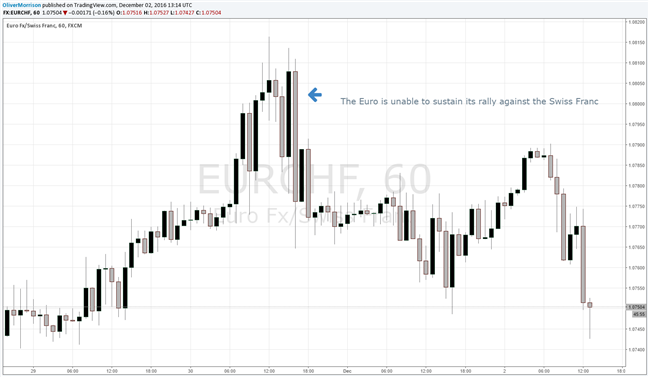