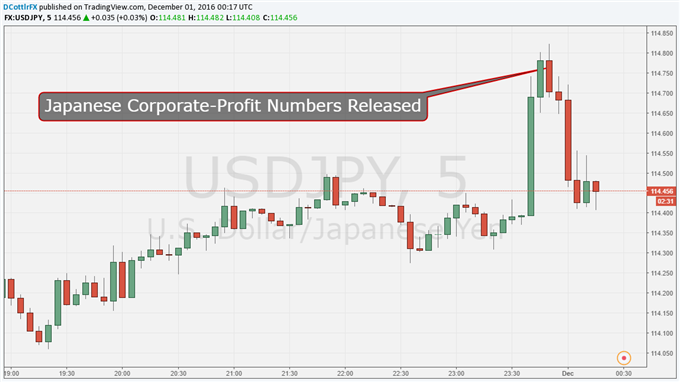 The Yen continued to weaken against the US Dollar early in Thursday’s Asian session as a mixed set of data on the Japanese corporate sector hit the wires.

Official figures showed that Japan Inc. is earning bumper profits, but spending precious little of them on capital for the future.

Overall capital spending fell in the year’s third quarter for the first time since the first three months of 2013. Capex fell 1.3% on-year, compared with market expectations of a 0.6% slide and the previous quarter’s 3.1% gain.

However, profits rose a chunky 11.5% on-year. That’s a huge jump from the previous quarter when they fell by 10%. Much of this will be pinned on a weaker Yen through the past three months. That makes offshore profits look a lot better when repatriated back into the Japanese currency.

USD/JPY had been moving up from the Asian open. It spiked up to the 114.80 area after the data release but returned quickly back to 114.45.

Market focus is squarely on oil. The Organization of Petroleum Exporting Countries (OPEC) agreed its first production cut for eight years on Thursday, sending the price of crude up by nearly 10%. Higher oil prices added to the inflationary story that’s been supporting the US Dollar generally since Donald Trump’s election.

As December gets under way, we can look back on November which was the strongest month for USD/JPY in eight years. The pair clocked up a gain of 8%.