- Unemployment is at lowest since July 2009, but still above pre-crisis levels

- Euro makes brief gains vs Dollar, but remains under pressure ahead of Italian referendum

The Euro made quick but fleeting gains on the US Dollar after unemployment in the Euro-Zone hit a seven-year low in October, according to official data from Eurostat published Thursday. The seasonally-adjusted unemployment rate in the Euro area was 9.8% in October 2016, beating analysts’ forecasts of 10%, down from 9.9% in September 2016 and from 10.6% in October 2015. That’s is the lowest rate recorded in the Euro area since July 2009, and the first time it’s dropped below 10% since 2011.

Crucially, while moving in the right direction, joblessness in region remains above pre-global financial crisis levels, and is therefore is unlikely to impact the European Central Bank’s thinking with regard monetary policy. Expectations are high that the ECB will extend its €80 billion per month bond buying program at its December 8 meeting (as we've forecast since September).

Despite yesterday’s stellar German unemployment data, the latest Euro-Zone inflation data showed that the current ultra-loose monetary has yet to feed through into higher prices. Eurostat figures yesterday showed Euro-Zone consumer prices rose by 0.6% year-on-year in November, the highest since April 2014, but still way below the central bank’s stated target of close to 2.0% over the medium term. The core inflation rate – ex food and fuel – remained constant at 0.8%.

Unemployment remained stable in Italy ahead of its crucial constitutional vote on Sunday which has become a proxy vote for the nation’s membership of the Euro-Zone, with the pro-EU Prime Minister Matteo Renzi promising to stand down if he loses the poll.

Elsewhere, IHS Markit’s final manufacturing PMI for the Euro-Zone recorded its highest reading since January 2014 in November, coming in at 53.7, in line with an earlier “flash” estimate and ahead of October’s 53.5. Anything above 50 indicates growth. Other elements of the report were positive too, with new orders and export orders strong, and prices charged by Euro-Zone manufacturers rising for a second month running in November and at the fastest rate since August 2011.

Manufacturing activity was solid in Germany, up in France, and higher in Italy, Spain, the Netherlands and Ireland although lower in Greece. This all continues to suggest that Euro-Zone economic growth will pick up to 0.4% or even 0.5% quarter-on-quarter in Q4 from 0.3% in Q3, although that should not stop the European Central Bank’s Governing Council from extending its asset-purchase program when it next meets on December 8. 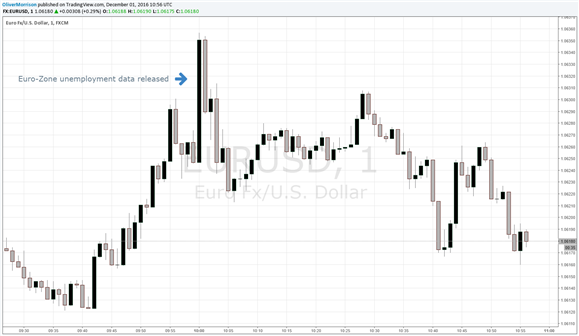 The Euro enjoyed a brief fillip on the release of the unemployment data, rising to 1.0636 from 1.0625, but continues to consolidate versus the Dollar owing to uncertainty in the run up to the vote. The US Dollar remains bullish as markets continue to assess the longer-term implications of President-Elect Donald Trump’s victory, EUR/USD dropped to a low of 1.05528 in yesterday trading and was last seen at 1.0624.