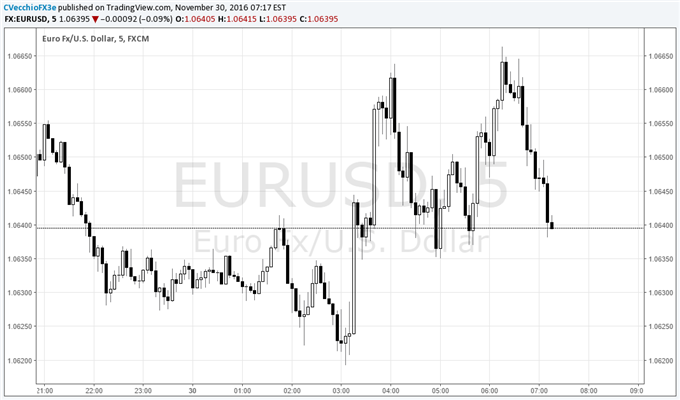 - But the data are notoriously erratic, and German consumer spending remains lackluster.

German retail sales have recorded their strongest monthly jump in over five years. Sales, adjusted for inflation and seasonal effects, in October rose 2.4% from September, according to the Destatis statistics office Wednesday. That’s the strongest monthly gain since June 2011, and above economists' forecasts of a 1.0% rise.

But this is a notoriously erratic measure and will do little to assuage hopes that flagging household consumption in Europe's largest economy is turning a corner, and the Euro remains stuck in a bearish downtrend versus the Dollar.

Germany's retail sales rose at the slowest pace in six months in October, according to retail PMI earlier this month. Sales also dropped in September from the previous month, their second consecutive decline, according to the GfK market research group. It hinted that terrorism concerns and global economic uncertainties have started to dent German consumer spending.

EUR/USD was last seen at 1.0639, little changed on yesterday’s trading, as the strong Dollar, a prevailing low interest rate environment and uncertainty in the run up to Sunday’s crucial Italian referendum vote all heap pressure on the single currency.

Meanwhile, there were no surprises from German unemployment data, also released Wednesday morning, which revealed overall strength in the labour market. Unemployment fell by 5,000 to 2.658 million, according to the Labour Office said. That was in a line with consensus forecasts. The unemployment rate remains at 6%. That’s still the lowest level since German reunification in 1990, although the report suggested that the employment level has “stagnated recently”.

There were also no surprises from the latest Euro-Zone inflation data, which showed that the current ultra-loose monetary has yet to feed through into higher prices. Today’s Eurostat figures show Euro-Zone consumer prices rose by 0.6% year-on-year, the highest since April 2014, but still way below the central bank’s stated target of close to 2.0% over the medium term. The core inflation rate – ex food and fuel – remained constant at 0.8%.

Since March 2015, the ECB has bought nearly EUR1.4 trillion of private and public sector securities to address the risks of a too prolonged period of low inflation. Around 90% of the total purchases are government bonds and recognised agencies, and 10% are securities issued by international organizations and multilateral development banks.

Since March 2015, government bond yields have fallen sharply, with shorter-dated assets entering negative yield territory, as the central bank flushed the system with cheap money in order to stoke growth and inflation. This liquidity has also weighed on the single currency which has traded within an approximate EUR/USD band of 1.05 – 1.15 for the last 20 months.

These measures point to only modest inflation in the Euro-Zone as a whole, increasing (the already high) expectations that the ECB will extend its €80 billion per month bond buying program at its December 8 meeting (as we've forecast since September).