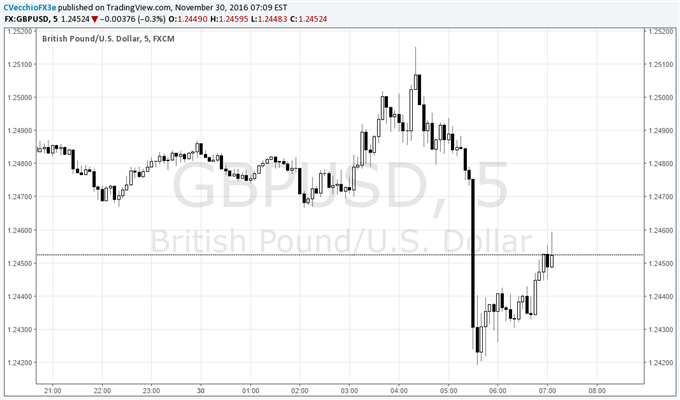 - GBP/USD climbed back above the 1.25 level early Wednesday in Europe, before easing later, despite a Bank of England Financial Stability report that warned of risks to the UK following the Brexit vote.

- The central bank warned the likelihood that some UK-specific risks could materialize remain high.

- One of the major UK banks, RBS, failed the BoE’s ‘stress tests.’

GBP/USD strengthened moderately in early European trading Wednesday, before easing back later, largely unaffected by a downbeat Bank of England Financial Stability Report. By midday in Europe, it was still close to the 1.2500 level and within the narrow trading range that has been in place for much of November.

In its report, the central bank said the outlook for financial stability in the UK remains challenging in the wake of the Brexit vote. “The UK economy has entered a period of adjustment following the EU referendum. The likelihood that some UK-specific risks to financial stability could materialize remains elevated,” it added.

Since the UK referendum on membership of the EU, UK financial stability has been maintained through a challenging period of uncertainty around the domestic and global economic outlook, the Bank argued. Moreover, substantial moves in financial market prices have not been amplified by the UK financial system.

However, vulnerabilities stemming from the global environment and financial markets, which were already elevated, have increased further since July. “Financial stability depends on the resilience of the system to risks. The UK banking system is capitalized to sustain the provision of financial services, including the supply of credit, to severe stresses such as those that could face the United Kingdom and global economies,” said the Bank of England.

As part of the Report, the Bank also released the results of its so-called “stress test” to measure the resilience of the UK’s seven major lenders to a global economic crash and one, Royal Bank of Scotland, failed. It has therefore been forced to devise a new capital plan in case of a financial crisis. The lender is still 73% owned by the government after its bailout in 2008.

Barclays was also asked to take action when it fell short of one hurdle, but the BoE deemed its existing capital plan was enough. Standard Chartered missed a key metric as well, although it was not asked to take any action. Lloyds Banking Group, HSBC, Santander and Nationwide Building Society all passed.

Looking ahead, Prime Minister Theresa May’s determination to begin the Brexit process by March next year could increase the concerns of the BoE, which asks for sufficient time for business to acclimatize to the post-EU period.

Therefore, a “hard Brexit” is a still a substantial risk, with the BoE warning that if adjustments take place in a short timeframe, there could be a greater risk of disruption to services provided to the European real economy, which could spill back to the UK economy through trade and financial linkages.”