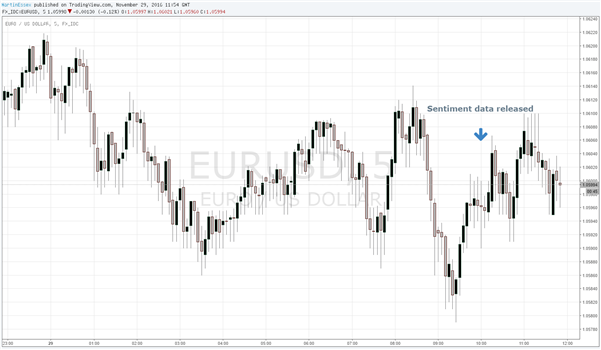 - Euro-Zone economic sentiment rose marginally in November but consumer confidence fell and there was a surge in inflation expectations.

- The data suggest accelerating growth in the Euro-Zone but that shouldn’t prevent the European Central Bank from extending its asset-purchase program next week.

- The data had little impact on EUR/USD, which continues to consolidate after its recent falls.

After two months of sharp increases, the European Commission’s economic sentiment indicator for the Euro-Zone edged higher still in November, rising to 106.5 from a revised 106.4 in October. The Commission’s business climate indicator fell to 0.42 from a revised 0.56 in October but consumer sentiment improved to -6.1 from -8.0 and consumer inflation expectations jumped to 6.3 from 4.3.

Taken together with the recent purchasing managers’ index data, the latest figures suggest a pick-up in economic growth in the Euro-Zone in the fourth quarter of the year to around 2% annualised from the 1.6% recorded in the third quarter. The numbers suggest no impact so far on the Euro-Zone from the UK’s Brexit decision to leave the EU.

Moreover, despite the surge in inflation expectations, core inflation in the Euro-Zone looks set to remain low so should not be an impediment to the European Central Bank extending its asset-purchase program from March 2017 to September 2017 when its Governing Council next meets on December 8 (as we've forecast since they last met in September).

Confidence could yet be hit by the Brexit vote, Donald Trump’s election as the next US President, the constitutional vote in Italy next weekend and a series of upcoming national elections.

Meanwhile, EUR/USD continues to consolidate after its recent sharp falls. It was trading above 1.0600 and ralyying in the latter half of European trading.