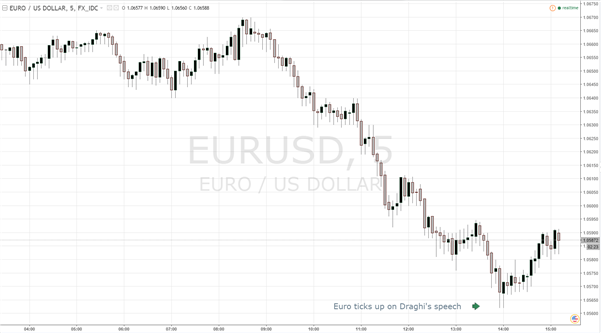 - However, he argues that the Euro-Zone economy has proved to be resilient in 2016, in spite of uncertainty stemming from the economic and political environment.

- In the wake of the Brexit vote, Draghi says that uncertainty appears to have weighed on investment and the Pound and that economic activity in the UK is generally expected to slow down.

The Euro-Zone economy proved to be resilient in 2016, in spite of uncertainty stemming from the economic and political environment, according to European Central Bank President Mario Draghi. At a hearing of the Committee on Economic and Monetary Affairs of the European Parliament, he said that inflation has gradually edged up, and that the ECB’s monetary stimulus has been a key ingredient of the ongoing recovery.

However, he was less upbeat about the global economy as a whole, arguing that it is expected to continue its recovery but that growth will remain slower than before the global financial crisis. “While showing signs of resilience, the global economy is facing significant political and economic uncertainties,” he said.

Once again, Draghi argued that to increase the effectiveness of monetary policy, fiscal and structural policies are needed that reinforce growth and make it more inclusive. He made no mention of the widely-touted extension of the ECB’s asset-purchase program but noted that the Euro-Zone economy continues to expand at a moderate but steady pace, despite the adverse effects of global economic and political uncertainty. “This gradual upward trend is expected to continue, not least owing to our monetary policy measures,” he said.

As for the UK’s Brexit vote to leave the European Union, Draghi argued that the UK would be hit harder than the EU. “If, in the long run, the risk of a less open UK economy in terms of trade, migration and foreign direct investment were to materialize, there would be a negative impact on innovation and competition and, thus, productivity and potential output,” he said. “Such developments would first and foremost weigh on the UK economy. They would to a likely lesser extent also have some limited adverse spill-over effects on the euro area,” Draghi added.

According to the ECB President, it is difficult to predict the precise economic implications of the UK withdrawing from the EU. “They will notably depend on the timing, progress and final outcome of the upcoming negotiations. Thus, it is important to have clarity on the negotiation process as soon as possible in order to reduce uncertainty,” he said.

Draghi’s comments Monday are broadly in line with his comments 10 days ago in a speech at a European Banking Congress in Frankfurt. He said then, in comments regarded as confirming the possibility of a an extension of QE, that even if there are many encouraging trends in the Euro-Zone economy, the recovery remains highly reliant on a constellation of financing conditions that, in turn, depend on continued monetary support.

“The ECB will continue to act, as warranted, by using all the instruments available within our mandate to secure a sustained convergence of inflation towards a level below, but close to 2%,” he said.

In Europe Monday, EUR/USD ticked up in the wake of Draghi’s comments, even though they do little to change the market view that the ECB will extend its asset-purchase program from March to September at either its next Governing Council meeting on December 8 or at the meeting on January 19.

UPDATE: ECB President Draghi, over the course of his speech, indicated that the ECB will revisit its easing program at its December 8 meeting, with an eye towards extending its length beyond its current projected March 2017 end-date, perhaps altering it in some form. President Draghi has been suggesting that a December shift would be possible since at least the September ECB meeting, notes Senior Currency Strategist Christopher Vecchio.