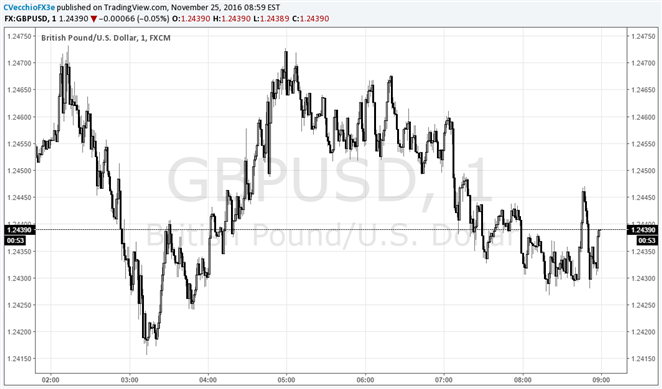 - British Pound gains on Euro and Yen; stays stuck in a range versus US Dollar after Thanksgiving.

The British Pound remains stuck in a range versus the US Dollar on Friday morning amid thin, post-Thanksgiving trading conditions, but was able to gain on the Euro and the Japanese Yen after data earlier today showed that the UK’s third quarter growth rate did indeed weather the initial Brexit storm. The Office for National Statistics confirmed the+0.5% quarterly growth rate in Q3’16, in line with analysts’ expectations. This was the second of three readings.

Importantly, the figure backs the preliminary data at the end of October showing faster-than-expected growth in the third quarter, so will be music to the ears of those convinced that Brexit fears and gloomy forecasts were exaggerated.What’s more, although the Q3’16quarterly growth was down from +0.7% in Q2’16, it was higher than the +0.4% rate seen in Q1’16. Annual growth was also unchanged at +2.3% year-on-year,continuing its on-year from the +0.5% low in Q4’15.

Business investment also rose +0.9% on-quarter, again encouraging given the concerns that investment would be hit by the June Brexit vote.Additionally, the output breakdown in the GDP report still shows that growth was driven entirely by a +0.8% quarter-on-quarter rise in services output; industrial production and construction output fell by -0.5% and -1.1%, respectively.

The data, in sum, are proving resilient in the wake of the Brexit vote. As the ONS noted, “The reporting period for this release covers Quarter 3 2016, and therefore includes data for the whole period after the EU referendum…Since the result, growth in gross domestic product (GDP) has been in line with recent trends. This suggests limited effect so far from the referendum.”

Currently, Cable has steadied over the course of the day, with GBP/USD trading at 1.2439 at the time this report was written. GBP/USD has proven quite resilient since the US Presidential election, during which time the odds of a rate hike next month by the Federal Reserve have increased from 51% on November 8 to 100% today. Despite rampant US Dollar strength (DXY Index has gained +3.72%) GBP/USD is up from 1.2375 at market close on November 8.

Elsewhere, the British Pound did make gains on the Euro after the release of the GDP report Friday morning, although EUR/GBP has since clawed back the losses. It was a similar story with the GBP/JPY pair; price action is proving to be a bit flat amid thin, post-Thanksgiving conditions.

Read more: EUR/USD Rallies as French Confidence Remains High Ahead of Next Primaries