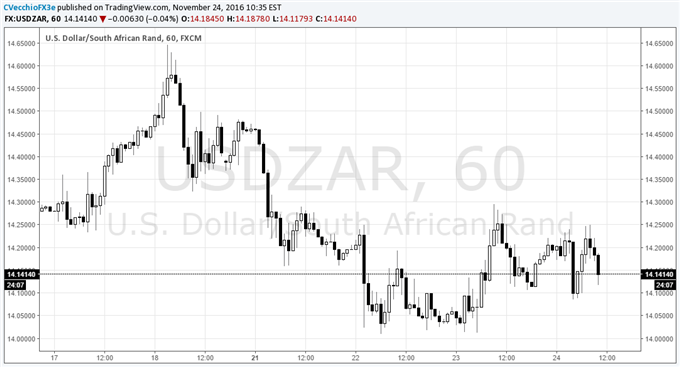 USD/ZAR, Up Big After US Elections, Steadies as SARB Holds Rates

- The South African Rand held steady as the central bank left its benchmark repo rate unchanged at 7.0%, as expected.

- Future movements in USD/ZAR are more likely to be determined by events in the US than in South Africa.

- A rating decision Friday by Moody’s will also be an important driver.

The USD/ZAR exchange rate held steady Thursday as the South African Reserve Bank, as expected, left its benchmark repo interest rate at 7.00%. The South African Rand slumped in the four days after Donald Trump won the US Presidential elections, alongside other high yielding, emerging-market currencies; but has held its ground since. USD/ZAR, which traded as high as 14.6472 in the days following the election, traded at 14.1414 at the time this report was written.

Against the background of slowing inflation, a weak economy and a turbulent domestic political situation, rates are unlikely to rise in the near future. A local drought, lower commodity prices and weak global demand have all put the South African economy under stress in recent months.

At the end of last month, South Africa’s chief prosecutor dropped fraud charges against Finance Minister Pravin Gordhan that had upset the nation’s currency. However, the possibility of still higher US interest rates after an expected increase next month is likely to be a more important driver of USD/ZAR; a move that could in turn raise South African borrowing costs. The Federal Reserve meets on December 14, and markets (per Fed funds futures contracts) are pricing in a 100% chance of a 25-bps rate hike next month.

In the coming days, a decision Friday by the rating agency Moody’s Investors Service on whether to downgrade the country’s debt rating should prove market moving. Moody’s will review its Baa2 rating, which is two notches above sub-investment grade, while the two other major rating agencies S&P and Fitch, which rate South Africa just one rung from junk, are expected to give their verdicts on Friday next week.

At a press conference Thursday, Reserve Bank Governor Lesetja Kganyago said domestic growth and inflation dynamics have remained more or less in line with expectations, but risks to the inflation outlook have increased moderately. As for the country’s debt rating, he said that if the financial markets have priced in a downgrade, and a downgrade does not take place, the SARB would expect that there would be a possible repricing in financial markets.