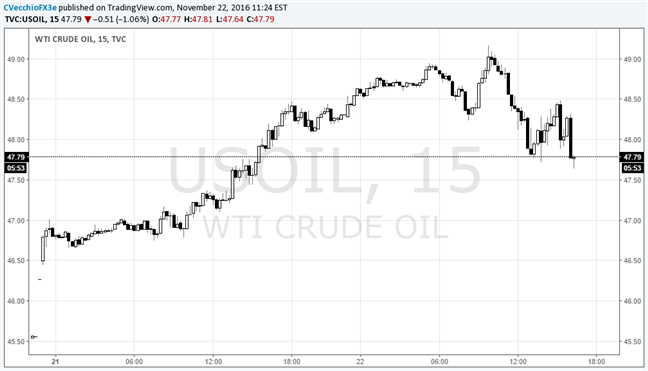 - Iran and Iraq reported to be having doubts over whether to sign up to a deal to limit output.

- Further choppy price action likely ahead of a meeting on November 30 between OPEC and Russia.

Crude Oil prices eased back Tuesday before recovering some of the lost ground as headlines suggested that Iran, Iraq and Indonesia are having doubts about a proposed deal to limit output. Members of the Organization of the Petroleum Exporting Countries, along with Russia, are meeting in Vienna, Austria, on November 30 in an attempt to bring supply closer to demand.

Energy prices surged around +4% to a three-week high Monday as the conviction grew that an agreement was close. Talk has centered on an output cut of between -4.0% and -4.5% for all OPEC members except Libya and Nigeria. However, Iran, Iraq and Indonesia are all now reported to have reservations, which sent prices back down Tuesday.

In the immediate wake of the headlines, the January 2017 Brent Crude Oil futures contract – the global benchmark – dropped from a high only just under $50/brl early in the European day to just $48.58/brl by mid-afternoon. The January West Texas Intermediate future – the US benchmark – fell from just over $49/brl to a low of $47.74/brl.

Both contracts have traded choppily the past hour despite settling down near recent lows, a microcosm of the conditionsset to persist until the November 30 meeting. However, the quick drops in price emphasized how difficult it could be for the move higher to continue without a steady stream of supportive comments. It has also been suggested that the market’s strength has been due, at least in part, just to a short-covering rally as hedge funds close out some of the large short positions they established over the previous three weeks.

Moreover, even if a deal is reached, the oil market is set to remain oversupplied, especially if there is a renewed rise in oil production in the US, where drilling activity has been rising sharply. According to a new paper by the Federal Reserve Bank of New York, oil prices have fallen by 10% since the start of Q3 mainly as a result of weakening, albeit volatile, global demand expectations.