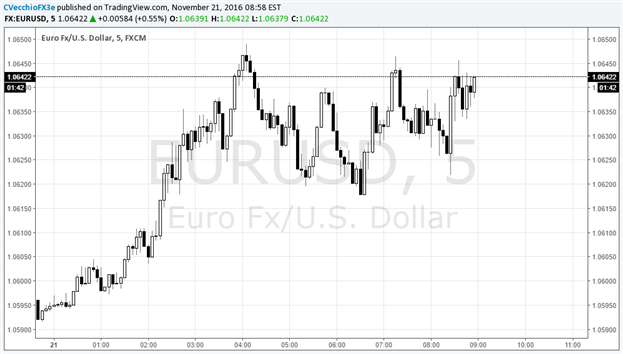 Euro Facing French Political Upheaval, but It’s Not All Negative

- Former French President Nicolas Sarkozy was surprisingly knocked out of the French elections this weekend.

- Sarkozy’s unexpected defeat has underlined the political risk that lies ahead for the Euro – another sign of the anti-establishment sentiment sweeping the Western world.

- However, higher Euro-Zone bond yields – supporting interest rate differentials - could be positive for the EUR/USD pair at the time being.

In an unexpected development – at least, according to the polls – former French President Nicolas Sarkozy was knocked out of the race to become the French Republican party candidate over the weekend, in advance of the nation’s Presidential elections in April and May next year.

Sarkozy was defeated by the two other runners on the French Republican ticket – former Prime Ministers Francois Fillon and Alain Juppe – who will face off against each other on November 27. With the French Socialists currently in disarray thanks to the rock-bottom popularity ratings of current French President Francois Hollande, the winner next year is likely to be the main challenger to Marine Le Pen, leader of the far-right National Front.

Although Le Pen has spent most of the last year trailing in opinion polls, she has seen a sharp rebound lately. While many are dismissing the turn in sentiment, if pollsters haven’t noticed the pattern, they’d be wise to: polling the establishment electorate during a populist wave will produce misleading results. Just ask the number crunchers around Brexit and the US Presidential elections.

While it’s a cliché that the financial markets hate uncertainty, and another that volatility lies ahead, the latest developments in France have once again highlighted the rising political risks driving the EUR/USD pair. However, it’s not a one-way street if interest rate differentials moved favorably.

In the wake of Sarkozy’s defeat, the yield on the benchmark 10-year French government bond climbed to 0.767% from 0.752% late Friday, a move which might be expected to help the Euro. Sure enough, with interest rate differentials moving favorably, and EUR/USD was trading at 1.0642 at the time this report was written on Monday, up from 1.0584 late Friday.