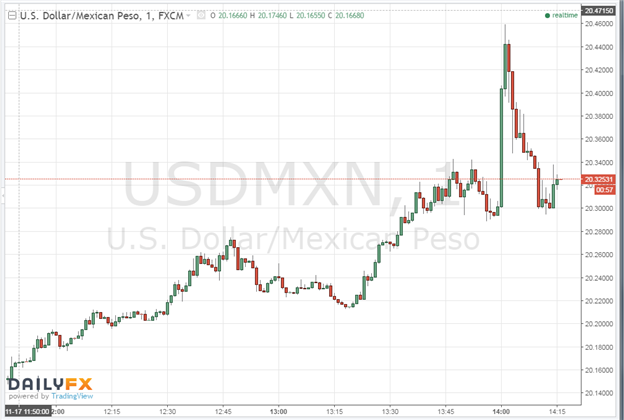 - Banxico raises its overnight rate by 50bps to 5.25% in line with market expectations

The Bank of Mexico met market expectations on Thursday and opted to increase its overnight rate by 50bps to 5.25% after convening for its November Monetary Policy Meeting. The aggressive measures comes in response to an almost unprecedented sell-off in the Mexican Peso (rise in USD/MXN) that followed the unexpected outcome of the U.S. Presidential Elections.

The decision to increase rates by half a percentage point is a direct effort to stabilize exchange rate in order to check capital flight and prevent inflation expectations from becoming unanchored at a time when consumer prices are already staring to rise (Oct CPI at 3.06% y/y from 2.61% y/y at the beginning of the year). Prior to today’s decision, Banxico has hiked borrowing costs on three separate ocassions during 2016 (February, June & September), each time by half a percentage point to reverse the domestic currency’s decline. And yet, those moves proved to be ultimately ineffective as MXN was unable to swerve off its depreciatory trend.

In the wake of the U.S Election – where businessman Donald Trump pulled off an upset by defeating former Secretary of State Hillary Clinton – the Peso took a nose dive and collapsed as much as 17% reaching an all-time low of 21.20 per US Dollar on November 11. The currency has since recouped some losses but the uncertainty of a Trump’s proposals to renegotiate NAFTA and to tax remittances flowing into Mexico will likely cap any advance for the peso.

In its policy statement today, Banxico indicated that the growth outlook has deteriorated and warned that votatility is likely to persist amid uncertainty with respect to billateral relations with the United States following the election of Donald Trump as the next president.

Following the announcement of Banxico’s policy decision, USD/MXN extended its advance rallying past 20.45 at one point. The immediate gains for the U.S. Dollar, however, were short lived with MXN recouping some intraday losses. At the time of this writing, USD/MXN has settled around 20.3464, down 0.71% for the day. With the Greenback showing such extraordinary strength surrounding the speculation of the December 14th FOMC meeting – also in the wake of President-elect Trump’s policies – it is difficult for this theme to wrest the market’s attention away. 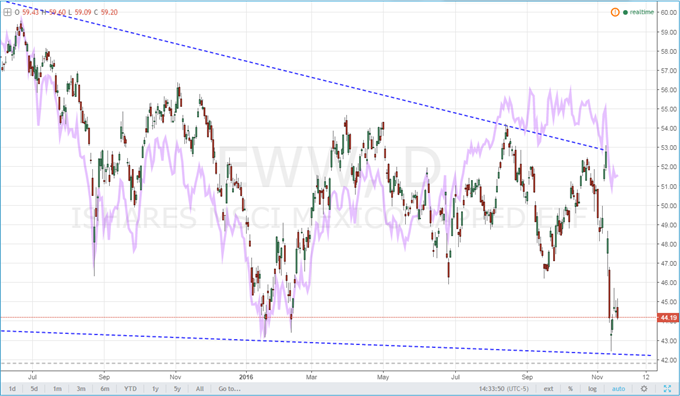 Meanwhile, the local capital markets would respond unfavorably to the efforts as expected. The MSCI Mexico ETF (EWW) showed little confidence in the central bank’s maneuvering through such a fundamentally-loaded enviroment. Appetite for Mexico’s assets has significantly lagged the general ‘Emerging Market’ set – as can be seen in the chart of EWW and the EMM (MSCI Emerging Market ETF) shown above.

Read more: Banxico Set to Meet for First Time Since US Elections as USD/MXN Surges