- In value terms, sales recorded their highest rate of annual growth for 14 years.

- Inflation, via imported prices, a concern going into 2017.

The British Pound popped back above GBP/USD 1.2500 after UK retail sales beat even the most optimistic analyst expectations. The data showed the volume of goods sold online and in store rose by 1.9% quarter-on-quarter, dwarfing analysts’ expectations of a +0.4% increase. On a year-on-year basis, the retail industry was estimated to have grown by +7.4% in October, according to the Office for National Statistics (ONS). In value terms, sales were up by +6.6%, the highest rate of annual growth seen since 2002.

Commenting on the data, Kate Davies, ONS senior statistician said, “The strong figures this month have been boosted by several factors. Cooler temperatures in October boosted clothing sales as shoppers took their cue to purchase winter clothing, while the supermarkets benefitted from Halloween. This has also coincided with the strongest growth in internet sales seen for five years.” 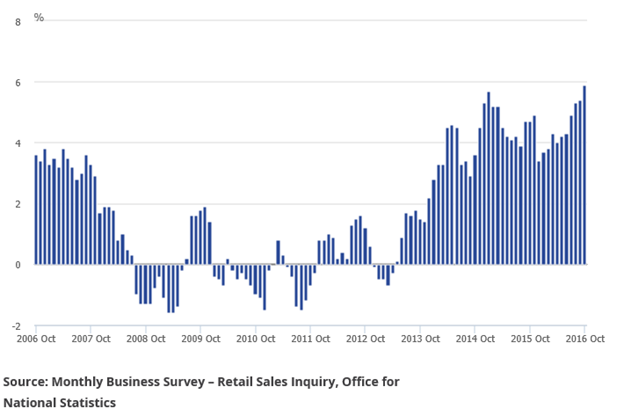 While today’s data will be welcomed by Chancellor of the Exchequer Philip Hammond ahead of next Wednesday’s Autumn Statement as a further sign of post-Brexit economic resilience, the future still looks uncertain. The fall in the value of the British Pound since the June referendum is increasingly being felt in the price of imported goods. The latest Bank of England Inflation Report highlighted the specter of inflation which is now expected to hit +2.7% in late 2017, up from its current level of +0.9%. And with wage growth expected to lag inflation, and with the recent jump in interest rates, household expenditure will face increasing headwinds going into next year.

For now the UK consumer seems to be happy spending despite the economic backdrop and retailers will hope this will continue into the fourth quarter and beyond. Continued spending, and perhaps big ticket sales ahead of anticipated price increases, will feed through into fourth quarter GDP data and give the government a boost ahead of next year’s difficult Brexit negotiations. The recent clutch of better-than-expected data will also keep further Bank of England interest rate cuts off the table, underpinning the recent pick-up in the value of Sterling.

The British Pound perked up on the retail sales release, trading above GBP/USD 1.2500 before settling back around 1.2470. Against the Euro, the Pound traded at 0.8575 before edging back towards the 0.8600 level.