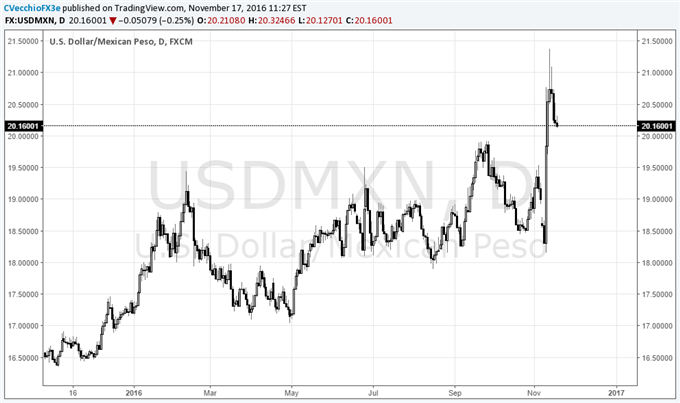 - USD/MXN has rallied sharply in the wake of the US Presidential elections, setting a new all-time high.

- Bank of Mexico likely to take steps to stem Peso depreciation as they’ve done over the past year.

- Join Chief Currency Strategist John Kicklighter today at 13:45 EDT/18:45 GMT for live coverage of the Banxico Rate Decision and the impact on the US Dollar, the Mexican Peso, and the commodity currency bloc.

Bank of Mexico is scheduled to announce its monetary policy decision for the month of November later today at 14:00 EDT/19:00 GMT. Market participants are widely anticipating that the monetary authority will increase its overnight rate by 50-bps to 5.25% in an effort to stem the rout of the Mexican Peso that has ensued in the wake of Donald Trump being elected as the next President of the United States.

In the wake of the US election where, ahead of time, markets were leaning heavily into a Trump loss (based on polling averages), USD/MXN has been on a sharp uptrend, reaching a historical high of 21.39 on November 11. Although the Peso has recovered some ground in the last few days, it is still down approximately ~9.0% since US Election Day, with the USD/MXN pair trading at 20.16 at the time of this writing. 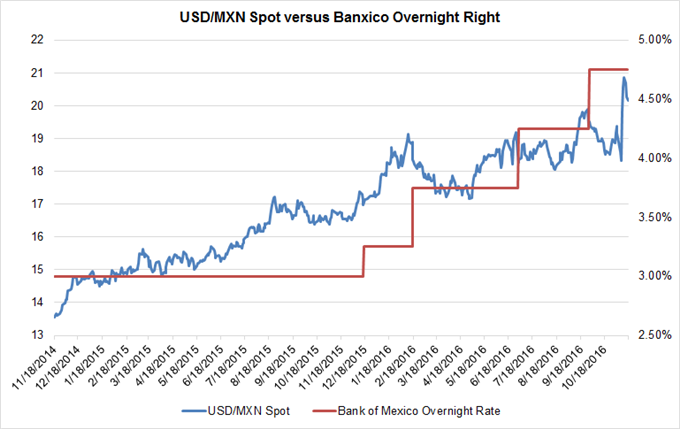 On three separate occasions in 2016 (February, June and September) when the Peso sustained large losses and had broken above 19 per US Dollar, Banxico stepped up to support the currency raising rates by 50-bps each time. In these three instances, the decision to increase borrowing costs by half a percentage point ultimately proved to be a stopgap measure to reverse weakness in the Peso as the local tender was unable to permanently swerve off its depreciatory path. The strategy, however, underscored that policy makers are more preoccupied with exchange rate fluctuations and a potential pick-up in inflation due to Peso weakness rather than the tempered outlook for economic growth.

In light of rising inflationary pressures combined with a large-magnitude drop in the Mexican Peso in the last few days, we believe that Banxico is likely to deliver another 50-bps hike on Thursday as it would be very difficult to explain a different response or a delay in monetary tightening. Markets have become acquainted with Banxico’s modus operandi so anything that falls short of an aggressive hike could produce another major USD/MXN rally back towards the November 11 high in the short term.

Looking beyond Banxico’s decision on Thursday, the economic outlook for Mexico remains very uncertain due to lack of clarity about policies and proposals from US President-Elect Donald Trump, who has promised to renegotiate NAFTA and tax remittances flowing into the southern neighbor. Overall, while some of these threats may not materialize – including the proposed border wall between the US and Mexico – they are being viewed in a serious enough light now given the election results that capital flows into Mexico may be chilled for the foreseeable future.