- Wage growth has hit a multi-decade low as economy continues transition away from export-based.

- AUD/USD drops to nine-week low amid broad US Dollar strength.

Australia’s latest jobs report doesn’t look good – and that’s not good for the Aussie Dollar, which is already under the cosh from fears of US protectionism. Employment rose by +9.8K in October in seasonally adjusted terms, missing expectations of a rise of +20K, according to the Australian Bureau of Statistics. Last month’s drop in full-time jobs, by +9.8K, which was the biggest decline since 2011, was also revised down to -29K. Full-time jobs rebounded in October after their big drop, at the expense of part-time positions, in September. Overall, the ABS said the trend still points firmly towards more part-time and less full-time work.

The unemployment rate stayed at 5.6% against expectations of a slight rise to 5.7%. The jobless rate has now hit a three-and-a-half-year-low. Despite the tightness in the labour market, today’s figures follow the news earlier this week that wages in Australia grew at the slowest pace on record in the year to September, according to the ABS. Wages, excluding bonuses, increased by +0.4% in seasonally adjusted terms in the third quarter, below the +0.5% rise expected. That’s the weakest quarterly gain since the ABS survey first began in 1997. Annual wage growth also slowed to 1.88%, again a record low.

The data do not help an already weak Australian dollar. The minutes of the Reserve Bank of Australia’s November 1 meeting, published earlier this week, noted that Australia’s economy is receiving a welcome boost from a sharp rise in commodity prices. However, US President-elect Donald Trump’s anticipated protectionist ‘America First’ policies are expected to hit commodity and trade-correlated currencies such as the Australian Dollar.

Australia’s economy is also hugely reliant on China, its largest trading partner, and a big buyer of bulk commodities such as iron ore and coal. Yet fears about growth in China have also been hit by Trump. As Senior Currency Strategist Christopher Vecchio noted last week, the President-elect’s policies suggest that the Asian/Pacific and emerging market growth miracle - fueled by weak FX rates, cheap credit, and overwhelming demand from Western economies - is coming to an end.

This all points to Australian interest rates set to weaken, while in the US a rate hike in December has been pretty much nailed to the mast by a robust retail sales print two days ago. Fed funds futures are currently pricing in excess of a 90% chance of a 25-bps rate hike next month. 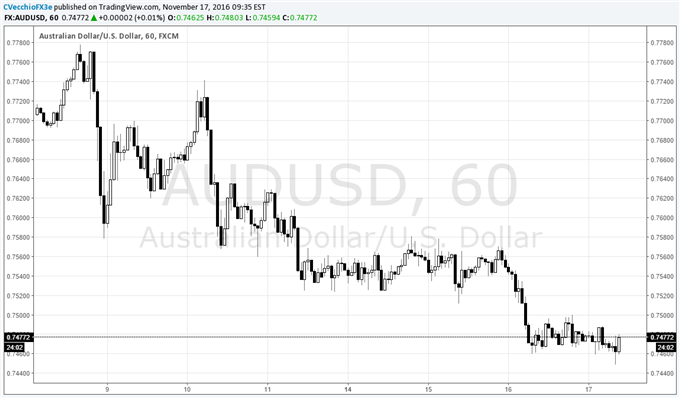 The Australian Dollar has dropped to a low of 0.7449, its lowest exchange rate since September 16, against its US counterpart this morning. At the time this report was written, AUD/USD was last quoted at 0.7477. Currency Strategist Michael Boutros sees support for AUD/USD developing below current prices, with key levels eyed at 0.7420 and 0.7387 thereafter.