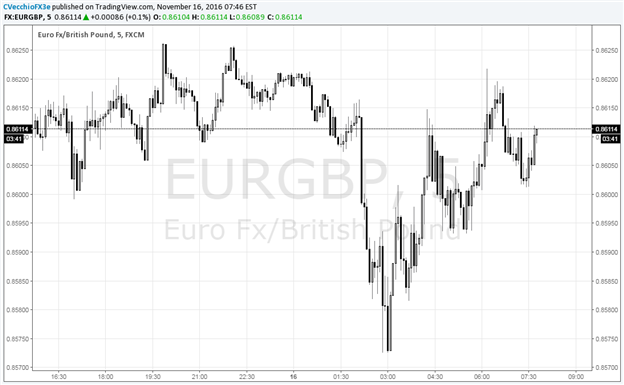 - UK unemployment rate falls to its lowest level in 11-years.

- British Pound steadies versus Euro, US Dollar in wake of data.

The labour force survey and the earnings data are for July to September, the first full quarterly set of data since the UK voted to leave the European Union.According to the ONS, there were 31.80 million people in work in the UK, 49,000 more than for April to June 2016 and 461,000 more than a year earlier.Average weekly earnings increased by +2.3% including bonuses and by +2.4% excluding bonuses compared with a year earlier, in line with market expectations, and outstripping inflation – an indicator of real wage growth.

Overall, the report today – even with the blemish of the claimant count rate rising to a two-year high – shows that the UK economy is moving closer to a state of “full employment” (explaining the higher wage growth and slowed albeit positive pace of employment gains) rather than weakening outright, as many market participants and politicians forecasted.

In May 2016, analysis from the Treasury concluded that a vote to leave would represent an immediate and extreme shock to the UK economy. “That shock would push our economy into a recession and lead to an increase in unemployment of around 500,000, GDP would be 3.6% smaller, average real wages would be lower, inflation higher, sterling weaker, house prices would be hit and public borrowing would rise compared with a vote to remain.”

The UK economy grew by +0.5% on the quarter to September, beating expectations of a slowdown to +0.3%, according to preliminary ONS data released at the end of October. At the time of its issuance, the report noted that “The pattern of growth continues to be broadly unaffected following the EU referendum with a strong performance in the services industries offsetting falls in other industrial groups.”

At the time this report was written, the British Pound, steadied around the 1.2430 level against the US Dollar and strengthened a touch against the Euro at 0.8611. In terms of other significant UK data that could jolt GBP-crosses this week, UK Retail Sales (October) are scheduled for release on Thursday with expectations of a pick-up in year-to-year sales of +5.4%.