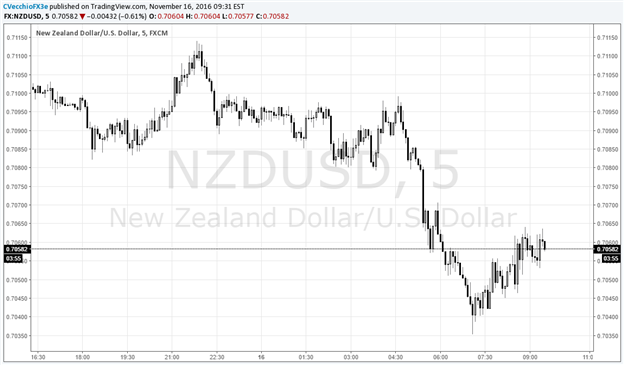 - But Kiwi dollar still under pressure in the face of US protectionism.

The Kiwi Dollar was unmoved despite New Zealand dairy prices rising for the third fortnight in a row, according to yesterday’s Global Dairy Trade auction result.

The dairy price index rose 4.5%, to US$3,519/mt. Milk powder prices, New Zealand's main export, rose +3.2% to their highest level since July 2014, as the drop in world dairy output supports the market. Despite the positive data, the New Zealand Dollar is continuing its swoon in the face of wider US Dollar strength.

The Reserve Bank of New Zealand’s decision to cut interest rates by 0.25% last week has weighed on the currency. The move was expected by markets, but the dovish tone in the bank’s accompanying statement in left the door open for more easing has put additional pressure on the Kiwi. Rates markets, which had been pricing in excess of a 40% chance of a 25-bps rate hike by the RBNZ’s first meeting in 2017, are now pricing in a greater chance of a cut than a hike (albeit rate cut odds are only 4.6%).

Recent Kiwi Dollar weakness has been exacerbated by US President-elect Donald Trump, whose anticipated protectionist ‘America First’ policies will hit commodity and trade-correlated currencies such as the New Zealand Dollar. The Kiwi suffered its worst two-day loss in over four months against its US counterpart on Friday. As Senior Currency Strategist Christopher Vecchio noted last week, President-elect Trump’s policies suggest that the Asian/Pacific and emerging market growth miracle - fueled by weak FX rates, cheap credit, and overwhelming demand from Western economies - is coming to an end.

Locally, the New Zealand Dollar has been under pressure in response to the earthquakes on Monday, but the extent of decline appeared fairly limited. However, the disaster could rise the odds of another interest rate cut next year if the economic disruption leads to a fall in confidence. The situation is far less severe than the Christchurch earthquake in February 2011, which eventually spurred the RBNZ to cut rates immediately afterwards from 3.00% to 2.50%.

NZD/USD continued its bearish trend this morning. It’s hit a low this morning of 0.7034 and has rallied slightly, to 0.7058 at the time this report was written. According to Senior Currency Strategist Ilya Spivak, 0.7035 represents a key level of support which, if broken, could see NZD/USD trade lower towards 0.6950.