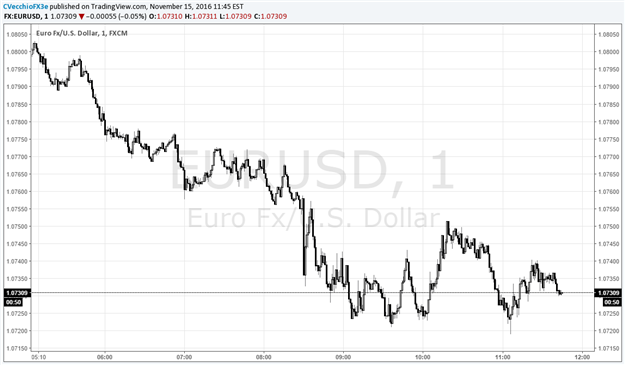 - EUR/USD could fall to parity and beyond next year.

The Euro remains under pressure this morning – with EUR/USD looking more and more likely to break out of its period of hyper-consolidation – as fresh data highlight concerns that President-elect Donald Trump’s protectionist policies and Britain's departure from the European Union will not only crimp growth in the Euro-Zone, but invigorate the existential threat of a populist-driven Euro-Zone disintegration (a living nightmare unfolding for the single currency).

German economic growth slowed in the third quarter of the year as exports fell following the UK’s Brexit vote, according to the Federal Statistical Office (Destatis) earlier on Tuesday. The Euro-Zone’s largest economy grew by +0.2% between July and September this year, slower than the +0.3% growth economists had expected. That’s well below the +0.7% rate in Q1’16, and half the rate of growth seen in the previous three months. On an annualized basis, the headline of +1.5% is a significant step down from the +3.1% rate in Q216. “The development of foreign trade had a downward effect on growth,” noted Destatis. “Exports were slightly down while imports were slightly up compared with the second quarter of 2016.”

Other significant data beat estimates today, but stilled contain warnings about future growth in the Euro area. The Euro-Zone’s ZEW economic sentiment index rose more-than-expected in November to a seasonally adjusted 15.8, from 12.3 in the preceding month, said ZEW, a German think-tank. Analysts had expected a rise to 14.3. The German ZEW index hit a five-month high, rising to 13.8 in November from 6.2 the previous month, beating market expectations of a rise to around 8.0. That’s the strongest reading since June.

Despite the improving sentiment in November, ZEW warned the US election result threatens economic expectations in the coming months. “The ZEW Indicator of Economic Sentiment has increased the fourth time in a row – not least due to the positive economic figures seen in the US and China, said ZEW President Professor Achim Wambach. “The renewed increase is indicative of a stronger economic growth in the coming six months. The election of Donald Trump as US President and the resulting political and economic uncertainties, however, have made an impact. After the election, the economic sentiment has been less positive than before."

The Euro made some gains versus the Dollar in the run up to ZEW release, reaching a high this morning of 1.08181. But its rallies are fading in the face of general Dollar strength (and some favorable US economic data), and many now expect Euro weakness to send EUR/USD to parity and beyond. Traders see about a 45% chance the European currency will sink to even parity, $1.000, by the end of 2017, about double the probability assigned a week ago, data compiled by Bloomberg show; EUR/USD has not breached parity since 2002. On top of Brexit and Trump protectionism, bubbling fears of Euro-Zone populism means the Euro is facing an unprecedented degree of uncertainty. 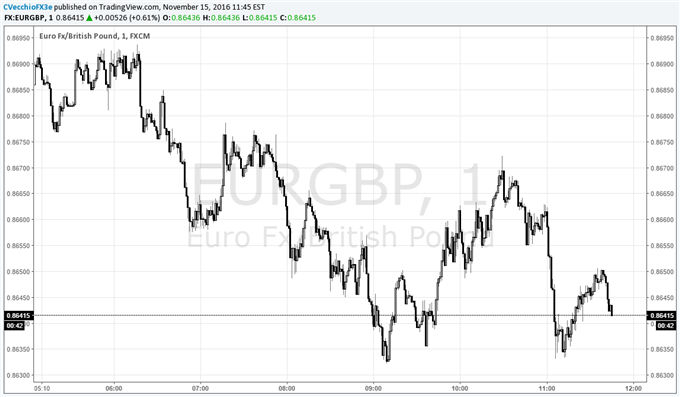 Among other EUR-crosses, notably, the Euro has gained on the British Pound this morning, and at last check EUR/GBP was seen at trading £0.8670. For the most part, the strength in EUR/GBP was due to deteriorating factors for the British Pound. After enjoying a post-Trump honeymoon period, Sterling has dropped back after a leaked memo revealed UK Prime Minister Theresa May’s government has no overall plan for Brexit. Earlier, the British Pound also put under pressure by a lower-than-expected UK inflation reading.