- US Dollar index trades at its highest level in nine-months.

- Euro may continue to weaken as risk clouds gather.

Government bond markets continue to fall in value, pushing yields higher, on fears that inflation is set to become entrenched. The US dollar is one of the main beneficiaries as higher yields boost the value of the currency and leave the door open for the Fed to hike rates further in 2017.

In the US Treasury market, the yield on the 10-year benchmark is currently at its 2016 high, around 2.25%, around 50 basis points higher than the post-Trump election low. The US 2-year yield is also signaling higher rates, and with its yield to maturity jumping to 1%, its highest level since January 2016.

This rates background is continuing to support the US Dollar on expectations of wider interest-rate differentials. Fed funds futures contracts are currently pricing in a 92% chance of a 25-bps rate hike in December, and markets have pulled forward the ‘second’ rate hike along the glide path from December 2017 to September 2017. The ICE Dollar Index, an aggregation of the US Dollar’s value compared to a basket of other currencies (although mostly Euro – 57.6%), is currently pushing back to highs last seen in January 2016. 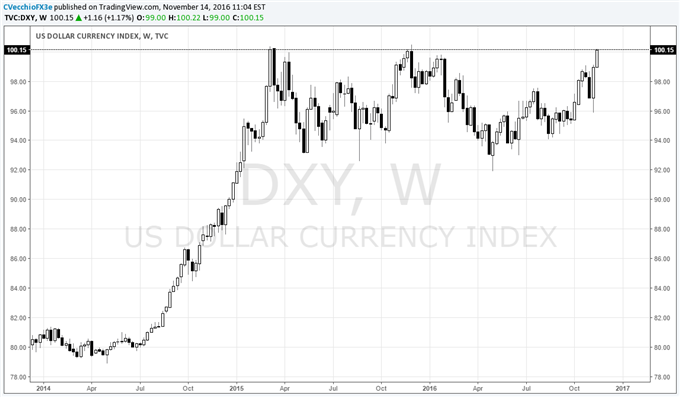 During his successful election campaign, Donald Trump promised the country a huge fiscal boost via infrastructure spending and tax cuts, a double boost for domestic inflation. In addition, President-elect Trump’s rhetoric about protectionist trade measures could also see inflation imported via higher input prices; labeling China as a currency manipulator and slapping a tariff on Chinese goods could kick off a trade war.

In marked contrast to the strong underlying support for the US Dollar, the Euro is currently under pressure as growth and inflation continue to struggle despite the ultra-accommodative European Central Bank monetary policy. It may get worse for the single currency with ECB President Mario Draghi expected to announce an extension of the central bank’s €80 billion a month bond buying program. The program, currently set to finish in March 2017, is set-to be extended by six months at the ECB’s December policy meeting, in another effort to boost the lethargic Euro-Zone. 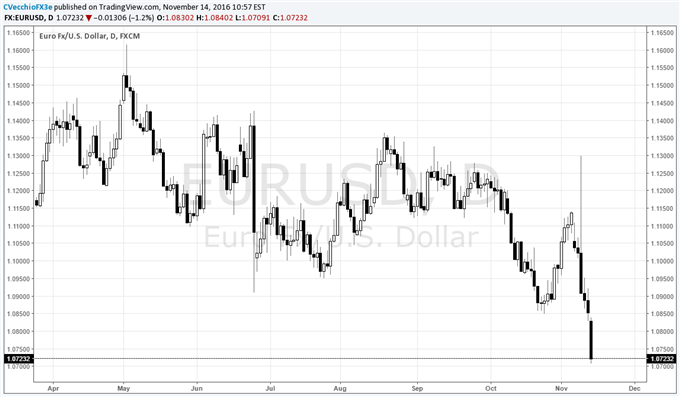 It may get worse for the ECB ahead of its December 8 policy meeting. On December 4, Italy goes to the polls with Prime Minister Matteo Renzi’s future at risk. The referendum, on Italian constitutional reform, is being used a vote on PM Matteo Renzi’s future with a ‘no’ carrying the potential to trigger Renzi’s resignation and a general election in 2018. Currently, it doesn’t look good for the incumbent PM with polls showing the ‘no’ vote with a slight lead, while in a general election the anti-EU Five Star Movement Party is also polling strongly. The Five Star Movement has said that it will hold a ‘Italeave’ referendum if voted in. Indeed, the populist backlash sweeping the Western world via Brexit and Trump may soon prove to be an existential nightmare for the Euro.