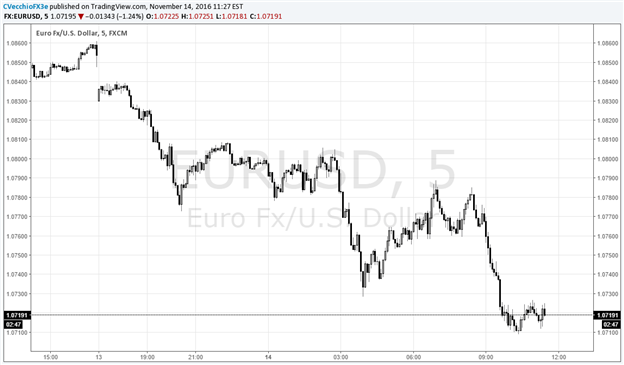 Euro Ignores Good Economic Data from Greece - and Everywhere Else

Positive data is doing nothing to lift the beleaguered Euro as we cross into the ides of November. Greek growth has risen for a second quarter in a row – that’s the first time that’s happened since 2006 – but the single currency continues to be overpowered by US Dollar strength in the wake President-elect Donald Trump’s victory, the bond market rout, and rising fears of Euro-Zone populism.

Greece's economy unexpectedly grew for a second quarter in a row and at a faster pace in the three months to September, according to a preliminary estimate from the Hellenic Statistics Authority. GDP was up a seasonally adjusted +0.5% from Q2’16, when it grew +0.3%, revised from +0.2% (q/q). On a yearly basis, GDP rose +1.5% in Q3’16, after a -0.6% drop in Q2’16. That’s the first rise in annual expansion in three quarters and the strongest since the first quarter of 2008, when the economy grew by +2.4%.

Euro-Zone industrial production also beat consensus and showed signs of an improving outlook, but it remains “sluggish and headwinds abound”, according to Eurostat. Industrial production fell in the 19 countries that share the Euro by -0.8% from August, when it rose +1.8% (y/y). Economists had been expecting a -1% fall (y/y).

The single currency remains under pressure as markets recalibrate their focus to the feedback loop of geopolitical developments to central bank policies. EUR/USD has hit new lows on Monday. At the time this report was writtten, the pair was trading near $1.0720, its lowest since the beginning of January.

The Euro is also continuing to drop against the Pound, buoyed by Trump’s talk of putting the UK at the ‘front of the queue’ in any trade deal negotiations. Such talk is reviving the spirit of a ‘soft Brexit’ and in turn, fanning the flames of hopeful populists across Europe. EUR/GBP was last spotted around £0.8607, less than one-tenth of a percent off on the day.

The odds on a US rate hike are holding above 90%, after rising from a low of 51% in the immediate aftermath of the Trump victory. The market’s perception of the course of action from the European Central Bank remains the same: namely, an adjustment to the QE program at the December meeting but no change to interest rates. More Euro-Zone data tomorrow – a German preliminary GDP estimate and ZEW survey Germany – are unlikely to alter that narrative.