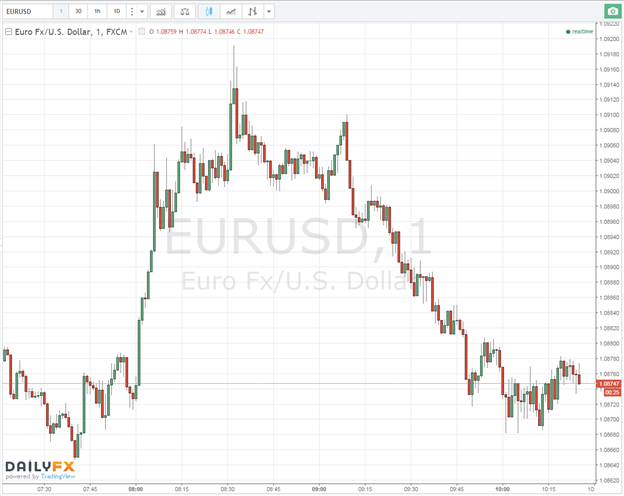 EUR/USD Stable Despite U. of Mich Sentiment Beating Expectations

- November Preliminary Consumer Sentiment rises to 91.6 vs 87.9 expected, from 87.2 in October

- It's Veteran's Day in the US (Armistice Day everywhere else), so take a moment to remember those who served.

A gauge of consumer attitudes in U.S. rose to the highest level in five months; an indication that sentiment around near-term economic prospects remain somewhat upbeat amid sustained gains in the labor market and as President Obama wraps up the final months of his second term.

The University of Michigan reported that its November Preliminary Index of Consumer Sentiment rose to 91.6, the highest level since June 2016, easing worries that consumer spending may not be sufficient to drive a broad economic recovery. Analysts polled by Bloomberg News had anticipated to see a much more moderate rebound to 87.9. Meanwhile the November Current Conditions Index climbed to 105.9 from 103.2, and above estimates of 103. Last but not least; the Index of Consumer Expectations spiked to 82.5 from 76.8, significantly above the consensus of 77.5. The survey noted that recent gains in sentiment were mostly credited to an improved outlook for the overall economy.

It is important to underscore, however, that the preliminary Consumer Sentiment data does not capture results from the U.S. presidential elections, where businessmen Donald Trump pulled off a major and historical upset by defeating former Secretary of State Hillary Clinton as the survey was conducted before voters went to the polls. In the upcoming months, results could change significantly, particularly for inflation expectations as the anticipated introduction of a large fiscal stimulus package under President-Elect Trump could boost the outlook for consumer prices.

Despite the better-than-expected results for the University of Michigan Consumer Consumer Sentiment Survey, EUR/USD stayed within a relative range as the data was likely a lower-importance print given the plethora of drivers seen throughout capital markets this week.The limited reaction was likely attributable to the fact that results from the survey were dated, given that responses were collected before the U.S. Presidential Election outcome was known. Market attention has now shifted to the Fed hiking cycle, which could become far more aggressive in the upcoming year under a Trump presidency.