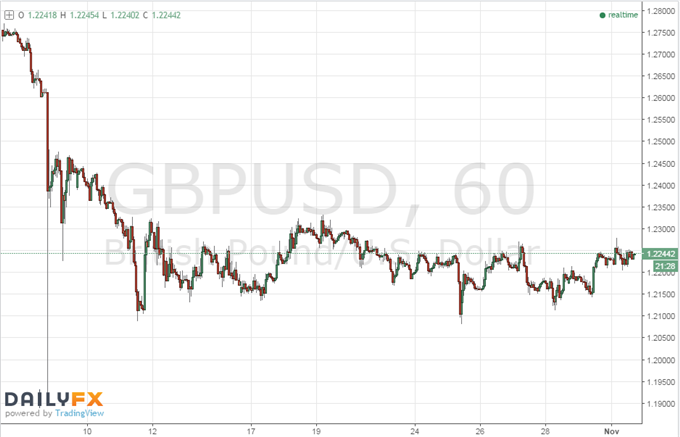 It’s become a cliché in the financial markets that the Pound is being buffeted by Brexit uncertainty. Yet, as the chart below shows, GBP/USD has actually been surprisingly stable since its brief spike lower on October 7. Since then, it has mostly traded in a relatively narrow band between 1.21 and just over 1.23.

So far this week there has been a modest rise on the news that Bank of England Governor Mark Carney will stay in his post until June 2019, rather than 2018 (with an option of three additional years) as agreed when he accepted the post. That means he will be at the UK central bank for most, if not all, the time that the Brexit negotiations take place.

Then there was an equally-modest fall on news this past session that the UK manufacturing Purchasing Managers’ Index – a leading indicator for the sector – eased to 54.3 last month from an upwardly revised 55.5 in September. While below the 54.5 expected, the PMI was well above the 50 level that separates expansion from contraction.

Nonetheless, this is not to say that volatility in GBP/USD will remain low. For example, the UK has yet to trigger “Article 50”, which would begin the formal process of leaving the EU. When that happens, suggested for March next year, there could well be a lurch downwards, and the pair is likely to respond to Brexit headlines both before and after that happens.

However, there are also so-called “tail risks” in the economic data – market jargon for sharp rises or falls when something unexpected happens. In particular, stronger than predicted economic statistics could lead to speculation that the Bank of England’s Monetary Policy Committee will abandon its swelling stimulus regime and return to earlier planning of normalization.

Few economists expect the MPC to announce a change in monetary policy on Thursday, when it also releases its quarterly Inflation Report. However, Deputy Governor Minouche Shafik stated in late September that she expected the central bank to ease further – perhaps even before Chancellor of the Exchequer Philip Hammond outlined Brexit plans. That said, a consistent and significant improvement in data may solidify the economic backdrop and curb calls that further monetary policy buffer is essentially to meet the BoE’s dire pre-Brexit assessment.

To move GBP/USD and other Pound crosses from its recent range may prove difficult. It seems Brexit-directed updates – key data, monetary policy or decisive negotiation point updates – stand as the few capable catalysts in the market. 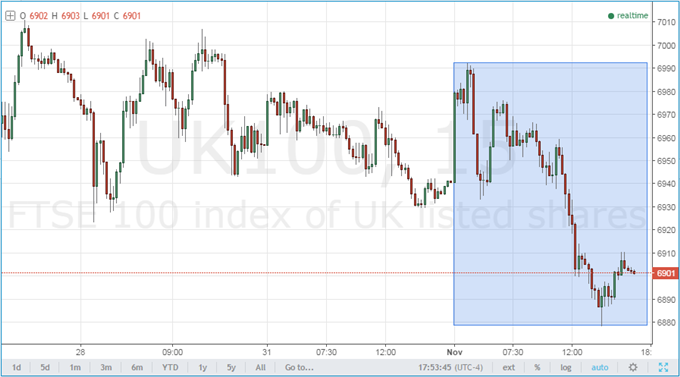