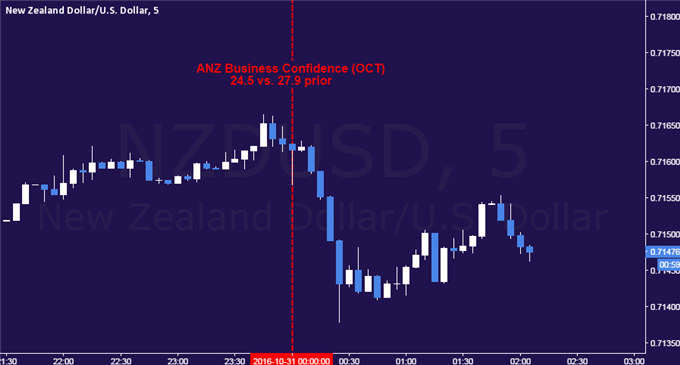 The New Zealand Dollar slipped back a little against its US cousin on Monday after a survey showed a slip in business confidence.

Businesses were less upbeat in September than they had been the month before according to a survey from major lender ANZ.

A net 24.5% of businesses were reportedly optimistic about the year ahead. That’s down three points on Augusts’ count.

But at face value it’s hard to pin all of this fall on a confidence survey that’s hardly catastrophic.

September’s business confidence reading was the still the second-highest for this year.

And New Zealand's economy has been doing pretty well, thanks to strong tourism and high migration. A housing shortage has also supported building activity.

The New Zealand Dollar had posted gains on the greenback earlier after the Federal Bureau of Investigation said it was investigating further emails as part of a probe into Hilary Clinton’s use of a private email system.

Narrowing polls in the US presidential race put some pressure on the US Dollar and the Kiwi was not alone in capitalizing on this.

However, it is possible that some traders have decided to take a little of their profits off the table.

Commodity dollars, which include the Kiwi as well as the Australian and Canadian Dollars, have been underperforming the majors as Treasury yields rise into a new week.

This could be simple pre-positioning for Wednesdays US monetary policy decision. If so, the ANZ data may have just amplified some existing selling pressure.

Either way investors won’t have to wait long until the next likely New Zealand Dollar market mover. The country is a major dairy exporter and data on prices achieved in that sector will be released on Tuesday.