After a streak of surprising economic data in October that gave the European Central Bank a pessimistic hue, data released today has helped swing markets’ focus back to the weak growth and environment plaguing the continent.

Euro-Zone inflation, as measured by the Consumer Price Index, rose to +0.5% in October from +0.4% in September (m/m), hitting its highest level since June 2014. According to Eurostat, the more important core inflation measure, which strips out volatile elements such as energy and food prices, stayed at +0.8% y/y in October for a third month in a row.

The data were in line with analysts’ expectations, but they still confirm the lack of signs of an upswing in inflation, and will thus continue to frustrate the European Central Bank, which is battling to stoke inflation in the region this year. Some measures suggest that core inflation may have even fallen to +0.7% from +0.8%, putting it back to May 2015 levels. Concurrently, Euro-Zone inflation expectations have run to their highest level since June 1. 5-year, 5-year inflation swaps now yield 1.477%, up sharply during the last month from +1.355% on September 30. 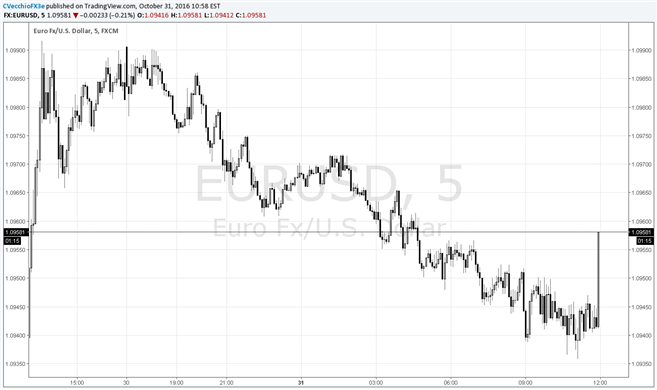 Euro-Zone GDP growth rose 0.3% in Q3’16, which was again in line with estimates. Yet growth is still slow and faces uncertainty in the run up to the UK’s departure from the bloc, scheduled to happen by the end of March 2017, which is feared will hit the region’s exports.

If Euro-Zone growth does not show further signs of improvement over the coming weeks, the ECB may decide that more stimulus is justified. Indeed, many economist now suspect the ECB will extend its bond-buying program beyond March 2017 at its December meeting.

Today’s data also fly in the face of positive Euro-Zone data of recent. Data was quite strong throughout October, in fact. The Citi Economic Surprise Index for the Euro-Zone jumped to +43.5 on October 28, from a mere +2.6 on September 30.

On Friday, figures showed that economic confidence in the area is at its highest level for this year, pointing to accelerating growth in the region. The European Commission’s Economic Sentiment Indicator rose to 106.3 in October from 104.9 in September to its highest reading since December 2015. Data released from individual Euro-Zone members, however, do show that growth remains divergent between countries, and there remain concerns about the French and Italian economies in particular.

See the DailyFX Economic Calendar for UK economic data for the week of October 30 to November 4, 2016.