Statistics Canada reported that the September Headline CPI Index rose +0.10% m/m and +1.3% y/y. Analysts surveyed by Bloomberg News had anticipated a +0.20% m/m and +1.4% y/y increase. Meanwhile, Core Inflation, which strips eight of the most volatile components of the consumer basket rose +0.2% m/m and +1.8% y/y in line with forecasts.

Bank of Canada adopted an inflation-targeting regime in 1991 and seeks to achieve an inflation mid-point goal of 2.0%. Policy makers, however, have been unable to hit that mark since the outset of the year amid ongoing economic slack and depressed energy prices; an indication that monetary policy may remain accommodative for a protracted period of time.

In a separate release, the National Statistics Agency said that Retail Sales contracted-0.1% in August after a revised -0.2% decline in July. Meanwhile, Retail Sales excluding Auto came in flat (0.0%) following a -0.2% drop in the previous month. The worsening retail sales report highlights the many challenges the economy faces and suggests consumer spending may be insufficient to fuel sustained economic growth even as fiscal policy (Child Benefit Program) aimed at stimulating consumption kicks in.

The flurry of data today comes amid a mixed and uncertain economic backdrop mostly characterized by stubbornly low inflation and anemic economic activity. Even as policy makers have sought to downplay the faltering economy in the past, it has become increasingly more evident that recovery will be very gradual and more subdued than originally anticipated. The Bank of Canada latest Monetary Policy Report evinces this negative development as policy makers downgraded Inflation and GDP alike for both 2016 and 2017 amid material excess capacity and as the profile for exports and the real estate sector had deteriorated.

Here’s a summary of the Canadian data: 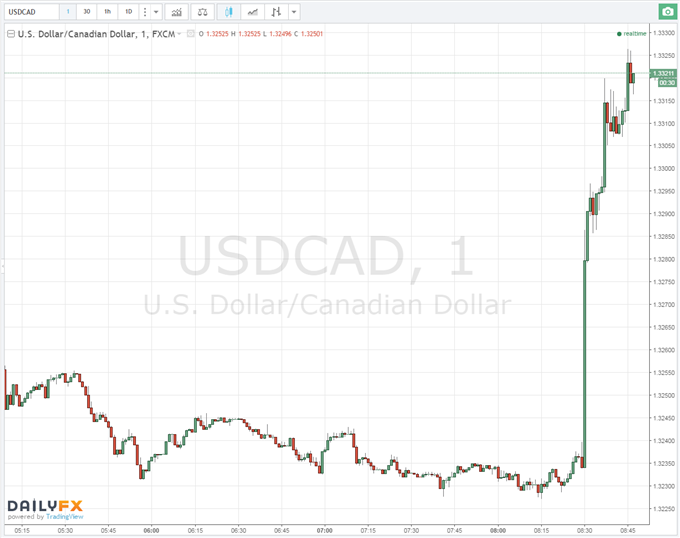 Immediately after the batch of economic data, USD/CAD spiked as high to C$1.33211 as weak CPI and Retail Sales in numbers in Canada point to a deterioration in economic conditions in the country and suggest policy makers will maintain monetary accomodation for as long as necessary to fuel a sustained and healthy recovery.