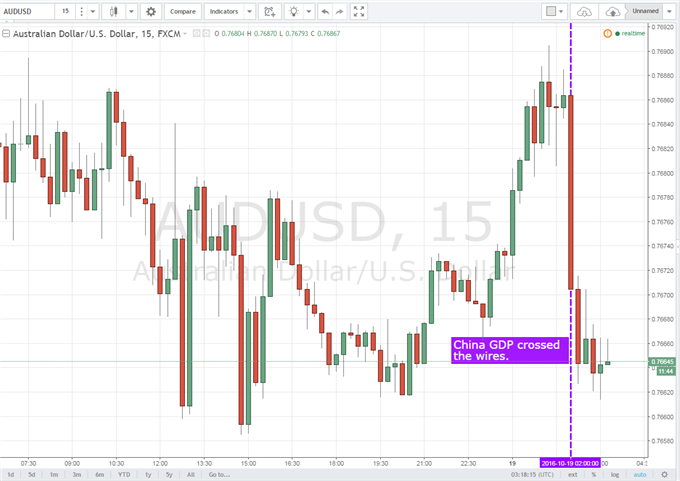 The Chinese Yuan and Australian Dollar slipped against ‘haven’ counterparts after in-line China GDP figures, industrial production figures cue subtle slowing of economy. The world’s second largest economy has been the focus of great concern from policy groups ranging from the Federal Reserve (for rate timing), Australia as an important export consumer and the IMF who has highlighted the country as a prominent risk for global growth trends. While the data has continued to deflate to levels that are comparable to the slump measured during the Great Financial Crisis (GFC) in 2008, the current path is considered a managed effort to cool the dramatic pace of growth to a more sustainable pace that does not unsettle the considerable non-performing loans the country floats from consumer to corporate to government liabilities. Recent concerns from the global monitors have improved modestly, and Wednesday’s data will help to anchor those sentiments.

According to the recent round of economic data, the Chinese economy expanded at an annual rate of 6.7 percent and 1.8 percent through the three-month period of the third quarter (3Q), both in-line with their respective forecasts and matching the previous quarter’s reading. Meanwhile, China’s September statistics offered a somewhat mixed update on the economy. Year-over-year, industrial production fell to 6.1 percent pace versus the 6.4 percent clip expected, while the YTD industrial production measure slowed to 6.0 percent versus 6.1 percent expected. From the consumer perspective, retails sales met expectations of 10.7 percent and the YTD figure beat estimates at 10.4 percent versus the 10.3 percent expected.