Bank of Canada Stephen Poloz is speaking at the post-rate decision press conference and has unleashed a wave of dovish commentary that has pushed back against post-decision CAD strength.

Of note, BOC Governor Poloz said, "Given the downgrade to our outlook, Governing Council actively discussed the possibility of adding more monetary stimulus at this time..." It would then appear that the market was underpricing the possibility of a rate cut substantially, with overnight index swaps only pricing in a 1.9% chance of a 25-bps rate cut today (Governor Poloz's comments would indicate it was a lot closer than that).

Here's how USD/CAD is reacting between the rate decision release and the Poloz press conference: 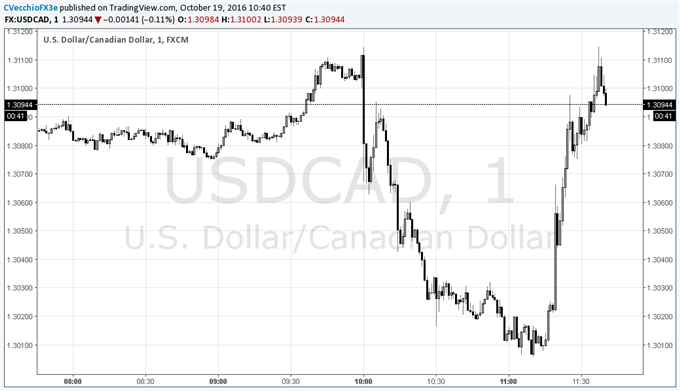 The Bank of Canada’s rate decision has produced a little bit more excitement than markets may have been anticipating ahead of time, sending USD/CAD to fresh session lows on the day. As expected, the BOC kept its main rate on hold at 0.50%. Although interest rate markets weren’t pricing in any expectation of action one way or the other – there was a 98.1% chance of a hold and a 1.9% chance of a 25-bps, according to overnight index swaps – conversation among market participants and economists beforehand differed. The question among market observers was: to what degree will the Bank of Canada downgrade its economic forecasts?

Or, as Currency Analyst James Stanley aptly put it, “How Dovish Might the Bank of Canada’s Forecasts Be?” As it turns out, the Bank of Canada’s downgrades to its CPI and GDP estimates, in conjunction with its observations on the Canadian economy and financial climate, were still more optimistic than market participants were expecting, as evidenced by the turn lower in USD/CAD.

Despite the CPI and GDP downgrades (see below for details), the Bank of Canada in its policy statement said, “After incorporating these weaker elements, Canada’s economy is still expected to grow at a rate above potential starting in the second half of 2016…the Bank considers the risks around its update inflation outlook to be roughly balanced, albeit in a context of heightened uncertainty. Meanwhile the new housing measures should mitigate the risks to the financial system over time.” This is a hawkish tone in what appears to be a superficially dovish statement.

Here are the 2016 and 2017 CPI and GDP forecast that the Bank of Canada downgraded today: 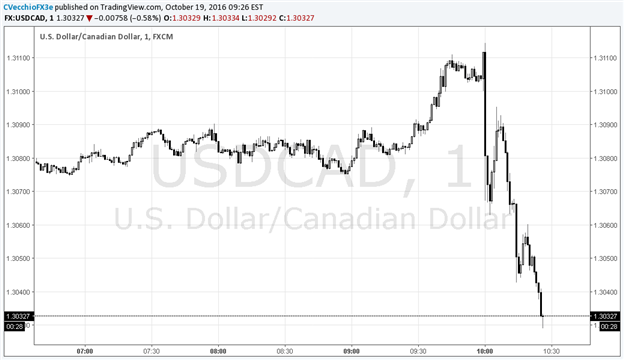 Following the release of the rate decision and policy statement, USD/CAD immediately traded lower from C$1.3112 to as low as C$1.3028 at the time this report was written.