The Australian Dollar advanced against its major counterparts after the Reserve Bank of Australia (RBA) released its most recent Financial Stability Review. One of the main topics in the report was centered on issues in the country’s housing market. In particular, the risks of an expected increase in housing supply, actions that have been taken amidst those risks and the central bank’s approach to these developments.

In the report, the RBA highlighted that domestic risks have continued to shift towards property development. Adding to that, non-performing mortgage loans have also picked up nationally but remain low. However, they would assess that these risks have lessened a little over the past six months. Looking ahead, the central bank has its eyes on a projected large increase in supply in some inner-city apartment markets. All else being equal, an increase in supply of a particular good should help reduce the price of it.

Where concern could arise for the central bank amidst the increase in dwelling units is home loans going to buyers of increasing credit risk. According to the RBA, banks have recently tightened their serviceability requirements further by restricting lending to borrowers relying on foreign income. In addition, they have taken steps to mitigate the associated risks by tightening lending conditions for new property developments.

At any rate, the RBA said that the developments in the housing market will need to be closely watched to ensure that any behavioral changes do not materially increase systemic risk. After holding rates unchanged at its October 4th meeting, the RBA continued with its passive wait-and-see approach pattern.

With Australian front-end government bond yields rallying following the announcements, the report likely reduced further RBA rate cut expectations. The markets are now pricing in a 28% probability that the Reserve Bank of Australia will cut rates over the next year. This is down from a 76% chance immediately after the central bank’s most recent interest rate decision.

Additional comments from the RBA pertaining to the Financial Stability Review: 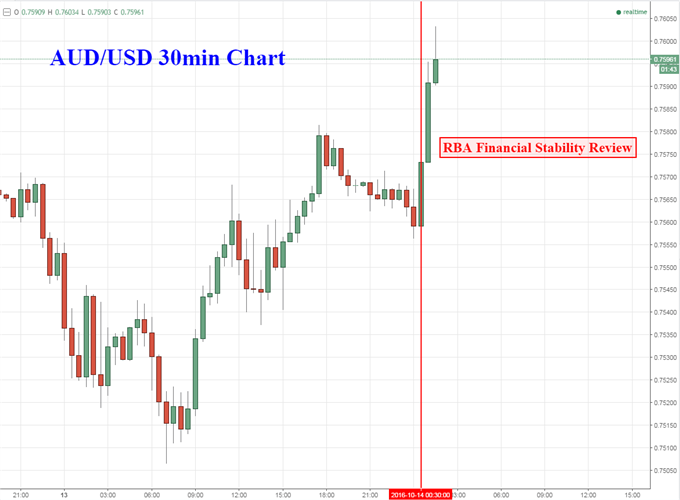