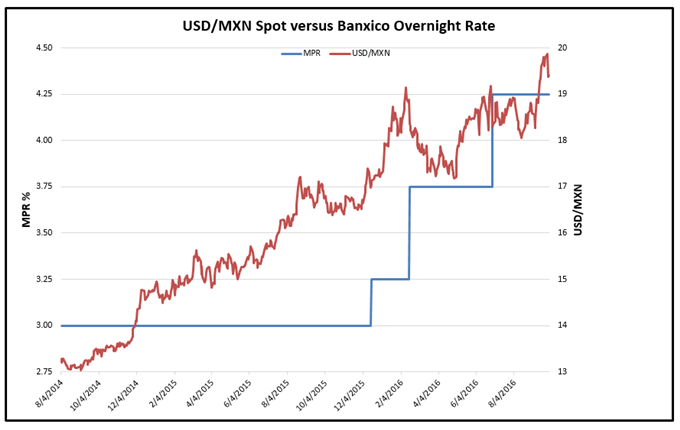 - Banxico seen hiking rates by 50bps to 4.75% by a slightly majority

Banxico is set to announce its September Monetary Policy Decision later in the day, with market expectations largely divided.A poll conducted by Bloomberg News shows a small majority expects the central bank to increase the benchmark interest rate by 50bps to 4.75% as a preemptive move to stem the depreciation in the Mexican Peso, which has been associated with fears over the outcome of the U.S. Presidential Elections and its direct implications on trade relations.

Since the outset of the month, the Mexican Peso has trended lower, with USD/MXN pushing above the psychologically important 19.0 handle and even reaching 19.92 – a record high - in late September. Historically, Banxico has hiked rates by 50bps on the two separate occasions in 2016 when USD/MXN had broken above 19 earlier to prevent inflation-expectations from becoming unanchored.

Although, inflation has not been a major problem in Mexico and has been mostly contained within the central bank’s target range, there are signs that consumer prices may be accelerating especially as Core Inflation has risen to an annualized rate of 3.05% in September (bi-weekly y/y) for the first time since late 2014, slightly above Banxico's midpoint goal.

Even the central bank curbed its 2016 economic growth forecasts to a range of 1.7%-2.5% from an initial projection 2.0%-3.0% in its latest Quarterly Monetary Policy Report, the downgrade may do little to deter Banxio from implementing higher borrowing-costs as policy makers have warned that the protectionist attitude in many G-20 countries poses risks to the inflation outlook via FX rates.