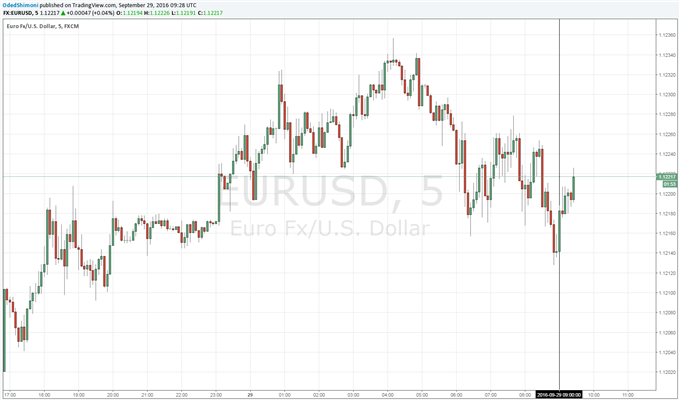 - The Euro traded slightly higher versus US Dollar

- Eurozone economic sentiment prints 104.9 vs 103.5 prior and expected

The Euro traded slightly higher versus the US Dollar (at the time this report was written) after today's Eurozone economic confidence figures came better than expected.

The Economic Sentiment Indicator edged higher to to 104.9, above the prior and expected 103.5 figure. This marked the highest number since January.

The index is compiled from five different indicator surveys including: industrial, services, consumer, retail, and construction.

Sentiment in the services sector remained at 10.0, in line with expectations.

Measures for industrial confidence improved to -1.7, which was above expectations for a -4.2 print. The report said the positive assessments resulted from managers' sharply improved assessments of the current level of overall order books, which neutralised the hefty losses reported in August.

The consumer confidence number confirmed the earlier estimate for a rise to -8.2 on more optimistic savings expectations and views on the future general economic situation.

The report today seems to be in line with rhetoric from ECB president Mario Draghi suggesting that the Euro-Zone is showing signs of a modest recovery. With that said, the numbers might also suggest the slow pace of that recovery, potentially implying that the ECB might have to step in again in the future.