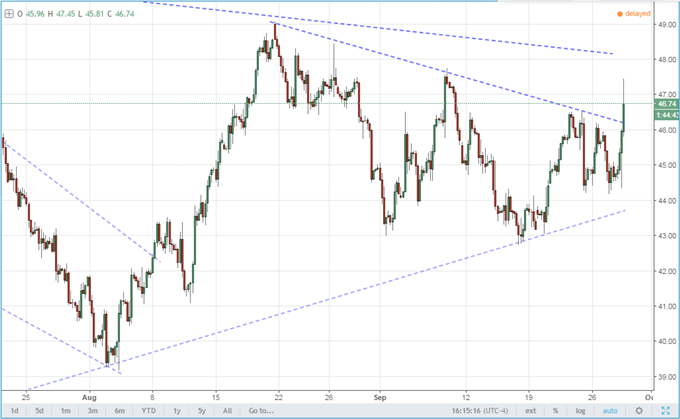 - US Crude oil prices posted one of its largest daily rallies in five months while USDCAD dropped 85 pips.

At the final day of its three-day meeting in Algiers, the Organization of the Petroleum Exporting Countries (OPEC) came to an understanding for a need for a curb to crude output, which has continuously grown to record levels. Suadi Arabia, the largest producer in the group, has been pumping at record levels in an effort to fight for market share. Previous meetings with rumors of output freezes had abruptly come to ends with a dispute among members and regularly loggerheads between Saudi Arabia and Iran. Seeming progress in this meeting however, has led the Saudi oil minister to suggest that “the worst of the dowturn is behind us.”

While there are no concrete plans yet, a person familiar with the matter has said that OPEC will be setting up a committee to determine the size of the cut for each member. The number suggested is a cap of between 32.5 – 33.5 million barrels a day. That compares with August output levels estimated at 33.2 million barrels per day. And while Iran and Saudi Arabia - two countries that had previously disagreed - were both present; an important absentee was Russia. Though a non-OPEC member, Russia is the world’s largest producer of crude oil with record output levels and had been involved in talks with the group regarding slowing output.

Earlier in the day, US crude oil inventories measured by the Department of Energy missed by a large margin, showing a steep drawdown in supplies to help work down the supply-demand balance from a different corner of the globe. US inventories unexpectedly fell -1,882k, missing expectations of 3,000k and following a previous drawdown of -6,000k. Cushing OK Crude also contracted with a report of -631k versus expectations of 95k and a previous growth of 526k. Meanwhile, US implied demand fell to 16.601 million barrels per day – the lowest level since the week of June 10.

US crude oil prices surged following both the initial rumors of a deal and further after the confirmation. The absolute range through the active session accounted for a remarkable 7 percent rally from the span’s low. The surge has pushed through immediate resistance, but momentum will need to be determined by activity over the coming days. 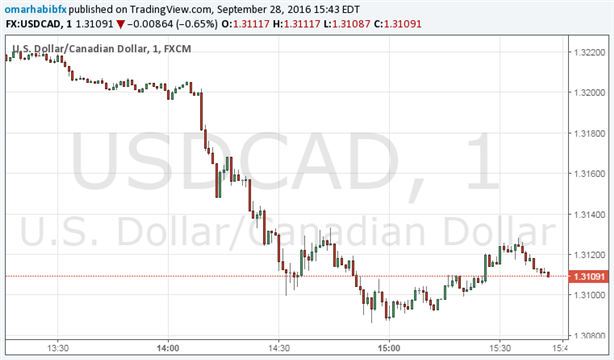 The USD/CAD fell on the data and continued its fall during the outpouring of OPEC-related news. The pair fell from 1.32675 to a low of 1.30860 and has begun to settle near 1.31. Crude oil prices jumped, rising over 5% on the day.

For comments or feedback, e-mail feedback@dailyfx.com 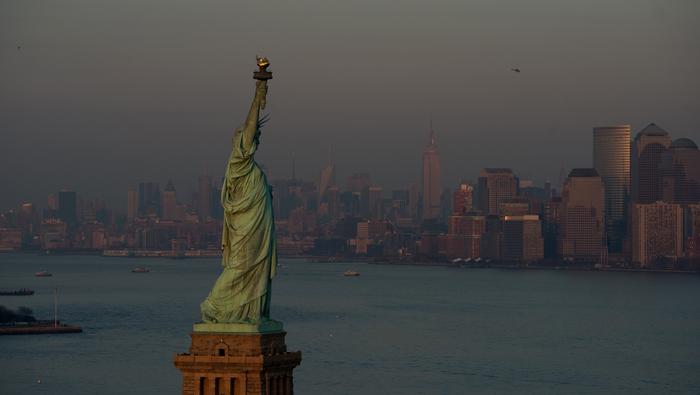