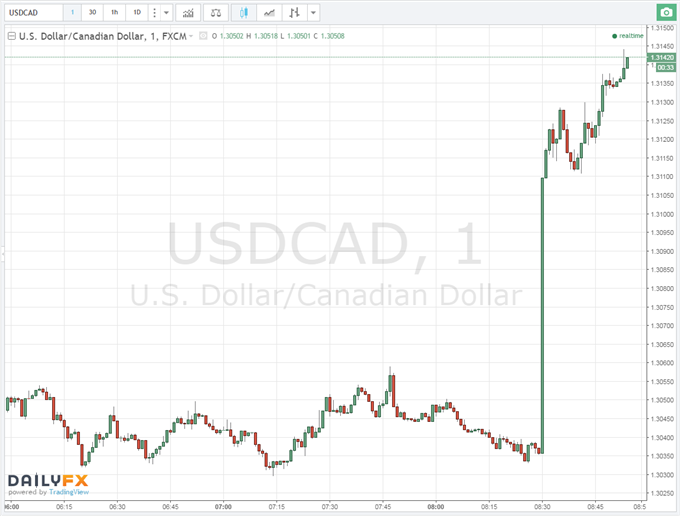 After a rather strong week, the Canadian Dollar is threatening to break its four-day winning streak after a batch of less than impressive economic data this morning. The data released were important ones, too – inflation and spending data underpin growth in advanced economies. As such, the Loonie is losing favor as the new data points to a fragile recovery needing further support from the Bank of Canada.

Inflationary pressures remained largely muted in August following a -0.2% drop in July, Statistics Canada reported this morning. The agency said that the August Consumer Price Index continued weakening and fell another 0.2% month over month, consistent with some loss of momentum following a sharp economic slowdown in Q2’16. With the monthly decline, annual CPI eased to +1.1% from +1.3% the previous month.

Market analysts polled by Bloomberg News had expected Headline CPI to rise +0.1% m/m and +1.4% y/y. Meanwhile, Core CPI, which strips eight of the most volatile components of the consumer basket, remained flat on a monthly basis and slowed to +1.8% y/y significantly below consensus from+ 2.1% in July.

Simultaneously, but in a separate report, Canadian retail trade figures corresponding to the month of July showed additional cause for concern. The data showed Retail Sales dropped -0.1% following a similar decline in June. At the same time, Retail Sales ex Autos also fell -0.1%. The market had anticipated July Canadian Retail Sales to expand +0.1% based on the assumption that the federal government's new child benefit payments program had started to trickle into the broaded economy.

Overall, disappointing inflation and retail sales numbers point to a fragile and protracted economic recovery and signals a longer delay in interest rate increases. The data comes on the heels of dovish comments by Bank of Canada Governor Stephen Poloz earlier in the week hinting that a move to raise borrowing costs could be postponed as the economy continues to face strong headwinds, for which stimulative monetary policy is required as the economy transitions towards full capacity. Today’s batch of Canadian data fits that narrative.

Here’s a summary of the Canadian data:

Immediately after the flurry of economic data this morning, the Loonie snapped its four-day winning streak and the USD/CAD pair spiked as high to C$1.3128. At the time the report was written, the USD/CAD had extended gains rising to C$1.3142 as economic results reinforce the argument that monetary policy will remain accomodative for a longer period of time than previously anticipated by market participants.