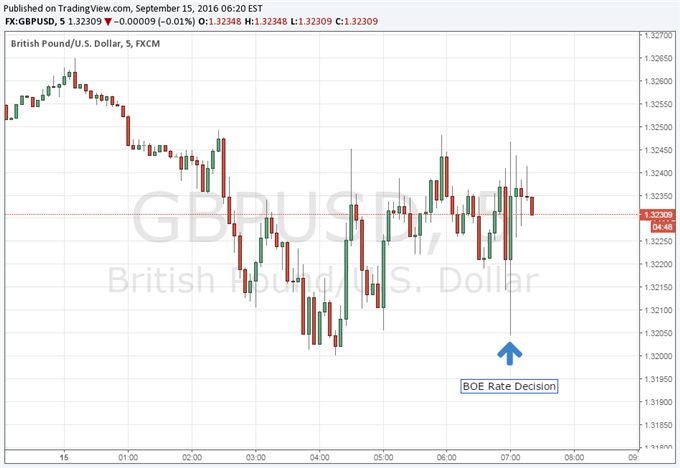 GBP/USD Volatile as BOE Opts for Status Quo, Could Cut in November

The British Pound was volatile versus other major currencies after today’s Bank of England (BoE) rate decision saw the bank keep rates at record low 0.25%, as was expected by economists.

The MPC voted to maintain the Asset Purchase Facility (the BoE’s QE programme) at a total of £435b, as expected, also by a unanimous decision.

The bank also announced that they will continue the purchase of up to £10 billion of UK corporate bonds, financed by the issuance of central bank reserves.

With the decision highly expected, attention quickly turned to the other element in the statement.

Market focus going into the event might have been on how the bank is going to respond to the better than expected UK data since the Brexit vote, and how that may (or not) change the bank’s outlook.

Judging by the statement, the BOE addressed all of those question for an overall statement that didn’t really provide something new, but perhaps leaned on the dovish side.

The bank emphasized that there was no new information since the August Inflation Report relevant for longer-term prospects for the UK economy, so the MPC’s view of the contours of the economic outlook following the EU referendum had not changed.

With that said, the committee did accept that near-term momentum of the UK economy had been slightly to the upside relative to the August Inflation Report projections, and that they now expect less of a slowing in UK GDP growth in the second half of 2016.

Interestingly, the bank emphasized that business investment intentions surveys weakened further since the August Inflation Report, which was in line with their expectations that business spending would slow more sharply than consumer spending due to Brexit.

The main point here might have been the fact that the MPC said they will look at the November forecasts, and if they are still in line with the August Inflation Report “majority of members expect to support a further cut in Bank Rate”.

In turn, the British Pound was volatile versus other major currencies on the news, initially moving slightly higher, perhaps on the fact that the bank said they expect less of a slowing, but eventually traded lower as it became clear November still seems highly probable for further easing.