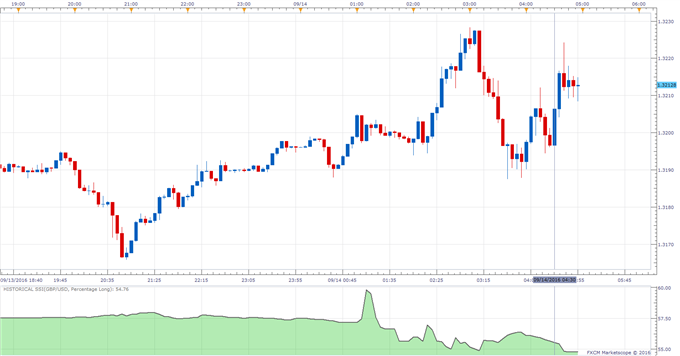 - The UK unemployment rate unchanged at 4.9%, lowest since September 2005

The British Pound pushed slightly higher versus other major currencies, after today's UK jobs data printed mixed figures, but overall implied that the labor market was resilient after the Brexit vote.

It’s important to note that the monthly Claimant Count Estimates relates to August, and the remainder of the estimates for the May to the July period, so covering data mostly before the Brexit vote.

The Office for National Statistics (ONS) reported that the unemployment rate from May to July was unchanged at 4.9%, which is the lowest rate since September 2005.

The UK added 174K jobs in the same time period, which was better than the expected and prior print of 172K.

The Jobless Claims figure, which might have been in focus due to the fact that it represented August, was below expectations and signaled a rise of 2.4K, worse than the expected call for a 1.8K addition, and the prior revised -3.6K print.

Expectations by the BoE are that the vote to leave the EU will lead to higher unemployment and reach 5.6% in 2018.

That projection is based, amongst other things, on the fact that a significant portion of UK businesses rely on access to the single EU market, and rising levels of uncertainty as a result of Brexit would mean that those businesses might tighten shop and be on the defensive on the prospects of reduced demand, probably slowing hirings and expansions before things are more clear.

Today’s numbers, while being mixed compared to expectations, showed that the UK’s labor market is still resilient in the immediate aftermath of the vote, potentially implying that the market interpreted the figures as pushing BoE easing bets further out. The beat in the average weekly earnings number might have helped as well, as a major concern for the economy at the moment seems to be the wages versus heating inflation situation.

With that said, the mixed readings alongside the fact that the BOE rate decision is tomorrow saw the British Pound having only a slight positive response.

Meanwhile, the DailyFX Speculative Sentiment Index (SSI) is showing that about 54.7% of traders are long the GBP/USD at the time of writing. The SSI is mainly used as a contrarian indicator implying a short bias.