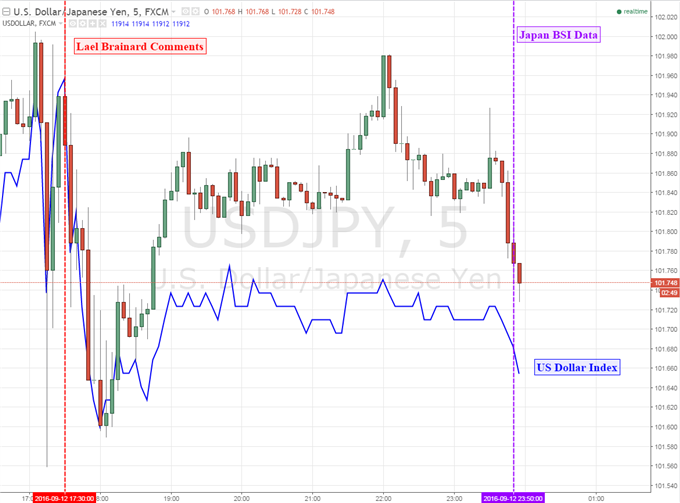 The Yen showed a reserved reaction against the US Dollar after Japan’s third quarter (3Q) business surveys crossed the wires. Prior to the beginning of Tuesday’s Asia session, Fed Board of Governors member Lael Brainard presented one of the last speeches from the central bank ahead of next week’s FOMC rate decision.

Ms. Brainard urged continued prudence in removing accommodation and added that it is unwise for policy to halt further labor market gains. Following the comments, US 2-year government bond yields tumbled, suggesting that Lael Brainard reduced near term Fed rate hike speculation. This may be why the Yen appreciated against the US Dollar ahead of the Asian market session.

Then, the Japanese BSI surveys crossed the wires. For 3Q 2016, Japan’s large all industry sentiment gauge increased to 1.9 from -7.9 in the second quarter (2Q). Meanwhile, the large manufacturing survey jumped to 2.9 in the 3Q from -11.1 prior. The employment survey for all-industry large firms also increased to 12.6 in the 3Q from 11.6 in the last quarter.

Despite the boost in sentiment, the data likely did little to adjust Bank of Japan easing speculation. BoJ Governor Haruhiko Kuroda has said that inflation will hover at slightly negative or 0% for the time being at a meeting with G20 members. As Currency Analyst David Song mentioned, USD/JPY may continue to trade within a broad range as market participants gauge the diverging paths for monetary policy.

Meanwhile, the DailyFX Speculative Sentiment Index (SSI) is showing a reading that roughly 75 percent of open speculative retail positions in USD/JPY are long. The SSI is typically a contrarian indicator, implying further USD/JPYweakness ahead.