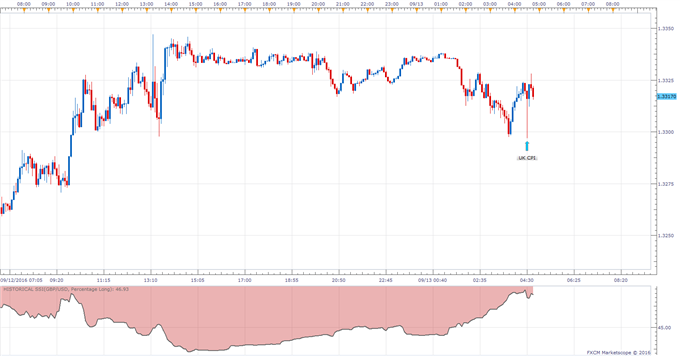 GBP/USD Down, But Quickly Recovers After UK August CPI Miss

- The British Pound was little changed versus other majors

The British Pound was little changed versus other majors (at the time this report was written), after the UK’s Consumer Price Index (CPI) printed figures below expectations.

Initial price action saw a quick drop and a recovery for an overall slightly negative response.

Headline CPI figure showed an annual rise of 0.6%, below the expected reading of 0.7%, with the prior number at 0.6% print. The month on month figure came below expectations as well by printing 0.3% versus 0.4% expected, with -0.1% prior read.

Core CPI, which excludes volatile factors such as food, energy, alcohol, and tobacco, printed 1.1% versus the expected 1.4% print, and unchanged from the prior number.

The figures were joined by RPI and PPI numbers generally below expectations as well.

Looking into the report, the Office for National Statistics said that the main upward contributors to the change in the rate were rising food prices and air fares, and a smaller fall in the price of motor fuels than a year ago.These upward pressures were offset by falls in hotel accommodation prices, in addition to smaller rises in the prices of alcohol, and clothing and footwear than a year ago.

Inflation still looks like it’s picking up in the UK mostly due to the effects of the lower Sterling following the Brexit vote, and economic data in general in the UK has been printing figures above expectations lately.

It is interesting to note in this context that the rally in the GBP/USD started the day the last CPI figures were released alongside the US CPI numbers.

With that said, the BOE explicitly said that they will look past an anticipated higher inflation, as they focus on reducing spare capacity.

The fact that the numbers today came lower than anticipated might have been interpreted by the market as giving further scope for the BOE to ease further, as inflation might not be heating up that rapidly for an overall slightly negative response by the British Pound.

Meanwhile, the DailyFX Speculative Sentiment Index (SSI) is showing that about 49.9% of traders are long the GBP/USD at the time of writing. The SSI is mainly used as a contrarian indicator, implying strength ahead.