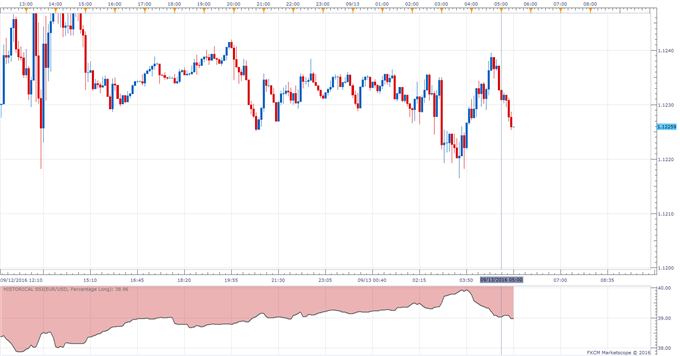 The Euro was little changed versus other majors (at the time this report was written) after today’s Euro-Zone ZEW Survey showed Financial market experts sentiment concerning the Euro-Zone’s economy has improved slightly in September.

The Euro-Zone’s expectations sentiment figure printed 5.4, which is above the prior 4.6 figure. The Current Situation Assessment remained virtually unchanged at -10.5.

The German ZEW Survey of Economic Sentiment remained unchanged at 0.5, which was below the expectations for a 2.5 figure.

The German Current Situation number dropped as well to 55.1 from the prior 57.6 reading, below the expected 56.0 figure.

A reading above 0.0 indicates optimism, while below indicates pessimism.

Looking into the press release, ZEW said that the ambiguity of economic reading from Germany and abroad means that forecasts are difficult at this time, as German exports and as industrial production disappointed, while the economic environment in the European Union as a whole is improving.

The Euro-Zone number might have helped offset the miss in the German figures, and with the ZEW generally not being a huge market mover lately the Euro was little changed versus other majors.

Meanwhile, the DailyFX Speculative Sentiment Index (SSI) is showing that about 38.9% of traders are long the EUR/USD at the time of writing, which could imply strength ahead on a contrarian basis.