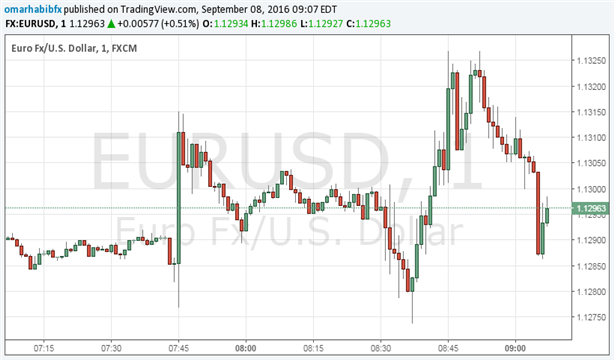 - Forward guidance from the ECB suggest a continuing, if not increasing, accommodate policy.

- EUR/USD took a ride, spiking initally on the rate decision and then again during the press conference.

The European Central Bank chose to keep interest rates unchanged today, with their Deposit Facility Rate remaining at -0.40% and the Main Refinancing rate at 0.00%, as expected. They also kept their Quantitative Easing program with the same target of €80 billions, despite some expectations of an expansion or alteration to the program.

Despite the lack of headlines shifts in policy, the ECB was increasingly dovish through text and rhetoric as they said that they are very willing to increase the timeline of QE beyond March 2017, until the inflation path is consitent with the ECB’s goals. The statement also mentioned that rates are expected to stay at this level or lower for an extended period of time, and certainly longer than the timeline for QE.

After the decision was released, President Mario Draghi spoke at the post-decision press conference and provided more much more color to the ECB’s thinking. He mentioned that the evidence so far suggests the Euro-zone has proven resilience to uncertainty so no additional stimulus needed for the time being, but risks to the economic outlook are tilted to the downside and so the ECB will continue to preserve very a substantial amount of support. ECB forecasts for growth were downgraded for 2017 and 2018 while the 2018 inflation forecast remained steady. Draghi attributed the moderate but steady 2016 growth to investment gains, thanks to cheap financing, and consumption gains, thanks to increases in employment and low oil prices, as proof that the easing policies implented were working.

The biggest statement coming from President Draghi was his statement that the ECB has tasked committees to evaluate stimulus options for further stimulus, despite saying that no additional stimulus is necessary right now. This comes surrounding news reports that the ECB would soon be out of bonds to purchase. Along those same lines, President Draghi conceded that negative interest rates were limiting the ECB’s ability to conduct full-blown QE.

This meeting comes following the Minutes release in mid-August (from its July meeting), which showed “cautious optimism” on the euro-area economy. The minutes showed that the ECB believe that the aftermath of Brexit would be “less marked” than was originally expected, despite downside risks rising due to uncertainty.

The euro spiked on the immediate rate decision as it rose from a low of $1.1277 to a high of $1.1315. During President Draghi’s press conference, the Euro took another ride, rising from $1.1274 to a high of $1.1327 and then falling back down to $1.1287. At the time of writing, the pair settled at around $1.1296. With FX volatility edging higher again, it’s the right time to review risk management principles to protect your capital.