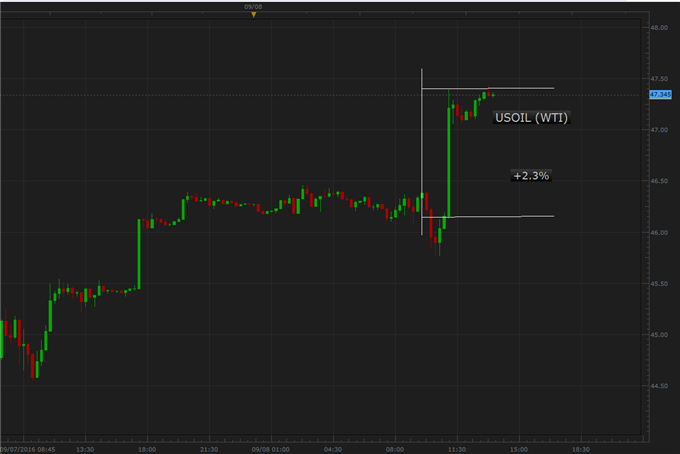 Want to learn more about the DailyFX SSI indicator? Click here to watch a tutorial

Crude oil prices spiked approximately 2.3 percent this morning following the release of the Energy Information Agency’s weekly inventory report. The data showed US crude inventories decreased by 14.5 million barrels from the previous week - the largest recorded, single-week draw since the opening week of 1999. Inventories being held at the Oklahoma Cushing reserve fell by 434 thousand barrels, and gasoline inventories fell by 4.2 million barrels. This data comes just a day after the America Petroleum Institute reported a 12 million barrel draw in crude inventories.

The large drop in inventories may have moved prices as it directly impacts the current status of US oil supply – a country that represents one of the largest supplies and consumers of the commodity. Easing of the oil supply glut is generally bullish for prices. However, the permanence of this supply-demand rebalance should not be concluded from this update alone. Some analysts are pointing out that this slide in holdings may also be a temporary response to the inclement weather with Tropical Storm Newton and Hurricane Hermine diverting shipments. OPEC members are also set to meet at the end of this month at the side lines of an energy conference in Algeria. Members and non-members reportedly plan to discuss cooperative production policies that may help to further ease the downward pressure on oil prices.

Tomorrow the Baker Hughes rig count report will be released at 17:00 GMT. 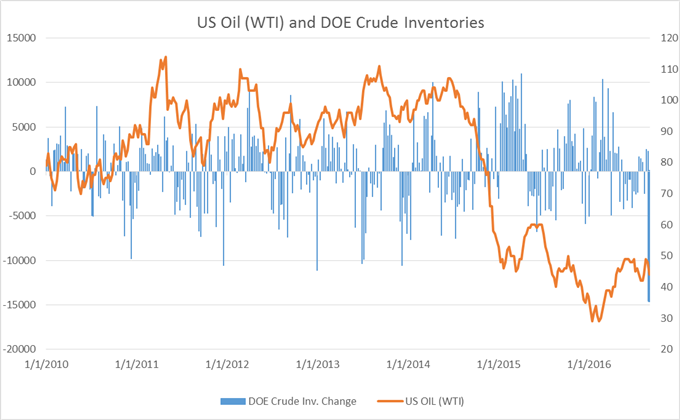