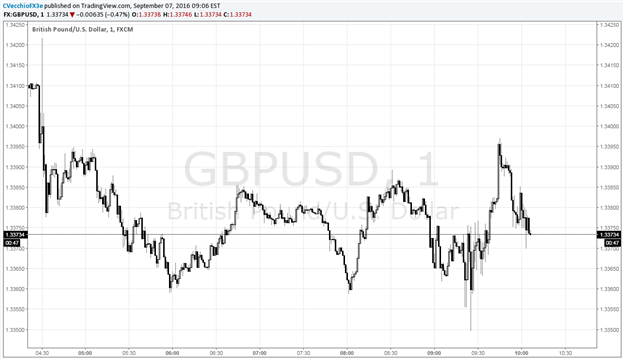 - BOE policymakers warn that more easing might be necessary in future.

A slew of Bank of England policymakers were on the wires this morning, shedding light on their views of the UK economy in the post-Brexit vote world. News headlines over the past few weeks have been nothing but cheerful, if not smug, about the state of the UK since the June 24 vote. BOE Governor Carney, alongside policymakers Cunliffe, Forbes, and Vlieghe, all weighed in.

With respect to the unexpected outperformance in the UK data recently, it seems the BOE is more than happy to take some credit. After all, the UK money supply is expanding at an incredibly fast pace right rate now (as measured by the three-month annualized rate of growth in M4ex), +14.7% y/y in July). All four BOE policymakers made clear that the central bank is able and willing to do more to stimulate the economy if necessary before the end of the year.

Admittedly, as all of the BOE policymakers conceded, data has turned out better than expected. The rebound in the PMIs in August was anticipated, as the BOE noted, as the sobering fact remains that Brexit hasn’t happened yet. The new UK Prime Minister, Theresa May, has yet to trigger Article 50, which would begin the process of negotiating the UK’s new standing in Europe with the EU. Until then, everything else is just noise: swings in short-term sentiment that will ultimately have no bearing whatsoever on how the UK is performing once the framework of the EU ex-UK economy is finalized.

Around the positive (‘the UK economy is doing better than we envisioned’) and negative (‘we may still need to ease policy further this year’) commentary, the British Pound was quite whippy this morning, testing both sides of its morning range versus the US Dollar. GBP/USD started the policymaker press conference around $1.3372, a tick below where it was at the time this report was written. Between then and now, GBP/USD traded between $1.3350 and $1.3397, levels in which it has traded since approximately 04:30 EDT/9:30 GMT today. With FX volatility edging higher again, it’s the right time to review risk management principles to protect your capital.