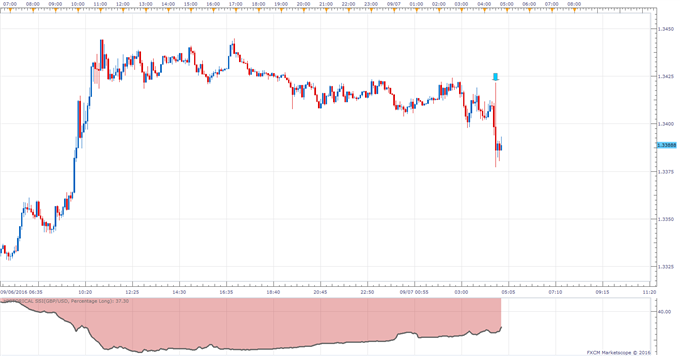 - Manufacturing production at 0.8% annualized vs 1.7% anticipated

- GBP/USD fell on the news

If you’re looking for trading ideas, check out our Trading Guides Here

The British Pound traded lower versus other major currencies after today’s manufacturing production numbers came well below expectation, with manufacturers cutting production at the fastest pace in a year in the immediate aftermath of the Brexit vote.

Industrial Production measures the change in the total inflation-adjusted value of output produced by manufacturers, mines, and utilities.

The manufacturing output (which account for approximately 80% of overall industrial production) was the big miss printing -0.9% in July, below an expected drop of 0.3% and the prior revised -0.2%. The year-on-year figure came at 0.8%, below the expected 1.4% print and the prior 0.6%.

Looking into the report, the Office for National Statistics said that the fall in manufacturing was negated by a rise in oil and gas.

The report came in line with July’s Markit Manufacturing PMI, which was a huge disappointment. With that said, the following PMI report for August (released last week) printed record breaking increases, implying that the initial July declines were a result of immediate Brexit worries that apparently subsided in August for a return to “business as usual” (at least for the moment).

This makes the market’s reaction quite interesting since Markit PMIs suggest a significant pickup in the August figures. With that said, with hard data coming out lower than expected the British Pound was lower versus other majors.

The DailyFX Speculative Sentiment Index (SSI) is showing that about 37.36% of traders are long the GBP/USD at the time of writing, implying a long bias on a contrarian basis.