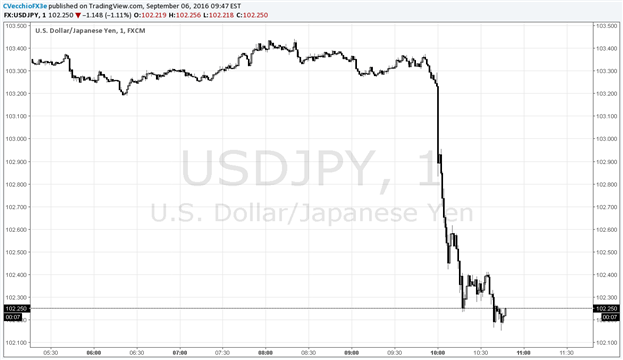 USD/JPY Tanks as ISM Misses by Most Since November 2008

- EUR/USD spiked higher as the US Dollar weakened on the news; USD/JPY fell quickly.

The US ISM Non-Manufacturing/Services survey for August disappointed expectations significantly, coming in at 51.4 versus expectations of 54.9, according to a Bloomberg News survey. The miss relative to expectations, even more dramatic than compared to last month’s reading of 55.5, was the biggest since November 2008. Overall, the index fell to its weakest level since February 2010.

Putting this in context with with the August US ISM Manufacturing survey, which disappointed last week with a print of 49.4 versus expectations of 52.0, it’s evident that Q3’16 US growth expectations may be a bit overcooked. In fact, after the release of today’s data, ISM Survey Chairman Tony Nieves said that “The past relationship between the NMI(R) and the overall economy indicates that the NMI(R) for August (51.4 percent) corresponds to a 1 percent increase in real gross domestic product (GDP) on an annualized basis."

Needless to say, the report was a disappointment for the US Dollar, especially after Friday’s lackluster August US Nonfarm Payrolls report. With the US Dollar following Fed rate hike expectations, it’s no surprise that the US Dollar traded lower after odds for a September rate hike dropped from 32% ahead of the data to 24% thereafter.

As the report came out, the US Dollar fell against the all major pairs, with USD/JPY falling immediately from ¥103.26 to as low as ¥102.15, at the time this report was written. With FX volatility edging higher again, it’s the right time to review risk management principles to protect your capital.