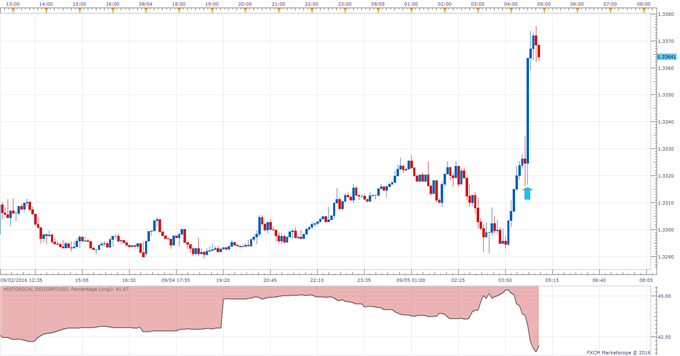 - British Pound Soared on the news versus all other majors

Leargood trading habits with the “Traits of successful traders” series

The British Pound spiked higher versus all other major currencies after today’s Markit/CIPS PMIs crushed expectations.

The Services diffusion index, by Markit Economics, printed 52.9 from the prior reading of 47.4, beating economists’ expectations of a 50.0 figure. The rise by 5.5 points was the largest observed over the 20-year survey history.

The Composite PMI beat expectations as well, printing 53.6 versus 50.8 anticipated with 47.5 prior.

The figures came a week after the Markit Manufacturing numbers crushed expectation as well, printing a ten-month high, which in turn sent the British Pound higher.

Looking into the report, Markit said that the latest data signaled a return to growth as companies reported that Brexit uncertainty had abated somewhat.

With that said, the overall strength of sentiment remained subdued on reports of ongoing Brexit uncertainty, with business confidence still at one of its lowest levels in the past four years.

Greater demand was explained by new clients and higher exports due to the weak sterling, higher domestic tourism and returning confidence.

The figures today were of high importance in the context of the Brexit situation, further suggesting that worries from immediate Brexit effect might be avoided.

As Markit said, the latest PMIs point to a stagnation in Q3’16 at the moment, which implies that much will depend on the September data to see whether the economy contracts or prints modest growth numbers.

In this context, signs of recovery here might have been interpreted by the market as data going against pre-Brexit worries for an overall solid look to the UK’s economy at this point in time.

The DailyFX Speculative Sentiment Index (SSI) is showing that about 41.9% of traders are long at the time of writing, apparently trying to pick a top.