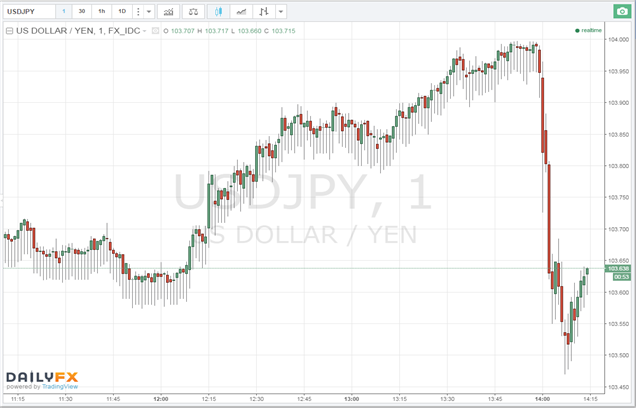 Economic activity in the US manufacturing sector slowed significantly in August,contracting for the first time after five months of consecutive expansion, according to an industry report released today by the Institute of Supply Management (ISM).

The July Manufacturing Purchasing Managers’ Index (PMI) revealed that national factory activity fell to 49.4 from 52.6 the month before. The reading was significantly below market consensus that had anticipated a print of 52.0. (As a reminder, as a diffusion index scaled between 0-100, a reading above 50 indicates expansion while a print below 50 implies contraction.)

The report showed that, of the 18 manufacturing industries in the survey, only six reported growth in August. The component breakdown revealed that New Orders plunged to 49.1 from 56.9 while employment slid to 48.3 from 49.4. Meanwhile ISM Prices Paid eased to 53 from 55. Overall, there were few good signs in the report. Nevertheless, traders may be more inclined to review the ISM Non-Manufacturing/Services report, which covers roughly two-thirds of all activity in the US.

Despite the disappointing reading, the ISM PMI report comes on the heels of solid data on ADP payrolls, consumer spending, consumer confidence, durable goods orders and industrial production that signal a slight pick-up in economic activity after GDP expanded at a paltry +1.1% in Q2’16; the Atlanta Fed’s GDP Now growth tracker for Q3’16 resides at +3.5% (although it will be revised at some point today).

With the ISM report, however, it is uncertain whether the latest string of economic data will be sufficient to tip the scale in favor of higher borrowing costs. The Fed last hiked interest rates in December 2015 for the first time in nearly a decade, but has since remained on the sidelines in the midst of stubbornly low inflation, global growth concerns, and numerous episodes of heightened volatility throughout 2016. The August US Nonfarm Payroll’s report tomorrow carries additonal weight after today’s letdown.

Here’s a summary of the US data print:

See the DailyFX Econmic Calendar for the rest of this week.

In the immediate wake of the ISM Report, USD/JPY fell as low as ¥103.47 as the data signaled a sharp slowdown in the manufacturing economy. At the time this report was written, USD/JPY had trimmed some losses and settled around ¥103.64.

Market participants will now be watching the key US Nonfarm Payrolls report set to come out Friday to gauge momentum in the labor market as the economy approaches full employment. Fed officials have recently underscored that the case for policy normalization has strengthened therefore a robust NFP report may give the Fed the firepower to finally pull the trigger and hike rates later in the year despite cooling manufacturing output.