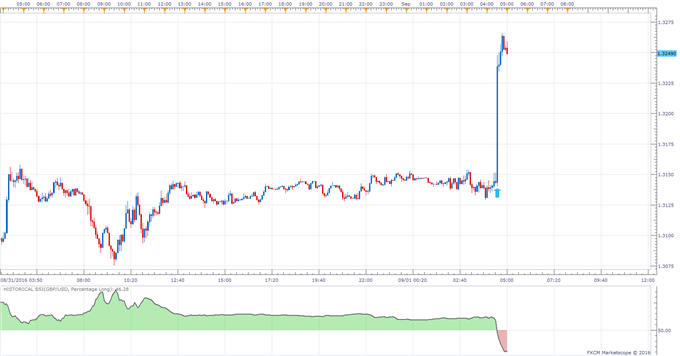 - British Pound soared on the news versus all other majors, short term outlook here

The British Pound surged higher versus all other major currencies after today’s Markit/CIPS Manufacturing PMI increased by the joint greatest amount in the survey’s history.

The diffusion index, by Markit Economics, printed 52.3 from the prior reading of 48.3, smashing economist's expectations of a 49.0 figure. The numbers marked a 10-month high.

Looking into the report, Markit said that August saw solid rebounds in the trends in UK Manufacturing output and incoming new orders.

Solid inflows of new work from export sources was aided by the drop in the sterling, while employment rose for the first time in the year-to-date.

Markit said that the depreciation of the sterling was by far the main factor manufacturers cited as supporting the upswing in new export work.

The counter effect of a lower Sterling meant that purchasing costs were higher.

Markit remarked that manufacturers and clients started to regain a sense of a return to “business as usual” following the Brexit downturn.

The figures today were high importance in the context of the Brexit situation. The initial indications from the UK’s economy has shown a mixed bag of readings, with businesses arguably showing more signs of post-Brexit jitters than UK’s private consumer.

In this context, signs of recovery in manufacturing might have been interpreted by the market as going against pre-Brexit worries for an overall solid look to the UK’s economy at this point in time. With that said, question marks still remain about business investments going forward.

Judging by the rise in UK yields at the time the news hit the wires, the data might have scaled back bets on a more dovish BOE posture.

The DailyFX Speculative Sentiment Index (SSI) is showing that about 46.2% of the traders are long at the time of writing, flipping short on the news, apparently trying to pick a top.