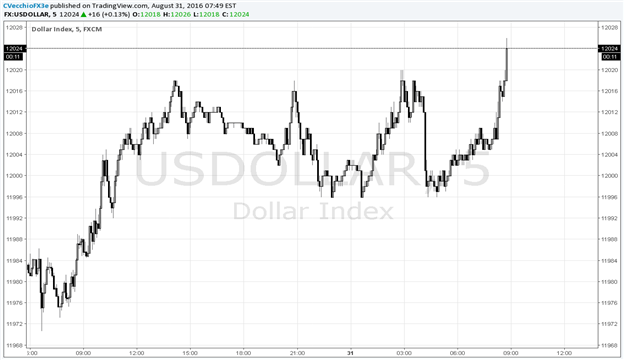 - This Friday brings the last NFP report before the Fed meets in September.

-The USDollar was largely unchanged following the report.

Friday brings the monthly US Nonfarm Payrolls report, but before then, today, we received a revealing batch of August employment data with the ADP release. US ADP Employment came in at +177K, beating expectations of +175K – not too hot, not too cold. Previous month’s job growth was revised up significantly, from +179K to +194k. The modest job growth number, along with in-trend Jobless Claims, should set up for a solid if not unsurprising NFP number on Friday.

Aside from the weak April and May reports, labor data has been consistent and has been the majority of the Fed’s case to begin the normalizing interest rates. This week’s NFP report is especially important because it is the last employment report before the Fed’s September meeting. While it is considered unlikely for the Fed to raise rates in September, Fed Funds Futures are only putting the chances at 27% this morning, Fed officials have been talking up the chances of a rate hike soon.

At Jackson Hole, Fed Chair Yellen mentioned that recent economic data had strengthened the case for a rate hike and just yesterday, Vice Chair Stanley Fischer said “I don’t think you can say one and done.” Nevertheless, markets seem unmoved by today’s ADP report, with the odds of a December 2016 rate hike holding constant at 59%.

The psychological level for markets has been +200K for monthly job growth but Federal Reserve economists do not agree. Chair Yellen, President John Williams of the San Francisco Fed, and the job growth calculator from the Atlanta Fed all suggest that the economy only needs +100K jobs growth per month to maintain its current unemployment level. Concurrently, Vice Chair Fischer yesterday said that we may be at full employment, its possible that all we need to do is maintain current levels.

There was little immediate change in the US Dollar following the data. EUR/USD frose to $1.1133 from $1.1128. With FX volatility edging higher again, it’s the right time to review risk management principles to protect your capital.