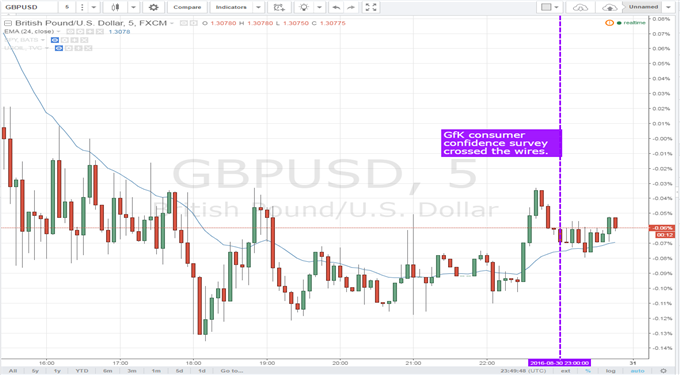 Keep an eye on short-term trends for the using the Grid Sight Index (GSI) here.

The British Pound was little changed against its US counterpart after a less gloomy post referendum consumer confidence survey crossed the wires. GfK consumer confidence came in at -7 for August versus -8 expected and -12 recorded in July. While improved from July this consumer confidence poll remained weaker than the -1 reading that preceded the June 23 ‘Brexit’ vote.

The July survey drop to -12 represented the sharpest slide in consumer confidence in more than two decades, so a better-than-expected August poll may indicate that consumers are feeling less concerned about their own finances as more time passes after the UK’s decision to part with the European Union without full economic fallout. Looking into the components of the survey, the balance of those consumers that saw their financial position improving over the next 12 months versus those that saw it deteriorate rose to a +4 reading from July’s tumble to -1 (prior to that, it had been positive since January 2014). The assessment of economic conditions over the subsequent 12 months climbed up from a deeper hole – from a four-and-a-half year low -33 to a more moderate -22.

Another indicator to cross the wires was the Lloyds Business Barometer for the same month. In contrast to consumers, business leaders saw their enthusiasm cool with the indicator falling to 16 from 29. This survey showed a steep drop before the Brexit vote and unexpected recovery the month after. In the details of this survey, the ‘current economic optimism’ measure slipped to 12 from 17. Potentially alarming was the projections of business activity 12 months forward which dropped to a four-and-a-half year low.

Meanwhile, the DailyFX Speculative Sentiment Index (SSI) is showing a reading of 1.3 following the announcement, meaning that for every trader short theGBP/USD, there are 1.3 on the long side. The SSI is a contrarian indicator at extremes. Real volume continues to settle after the exception swell in turnover in the two to three weeks immediately following Brexit. 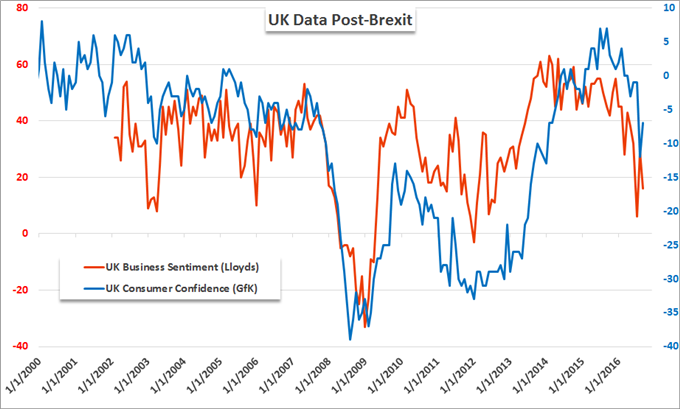