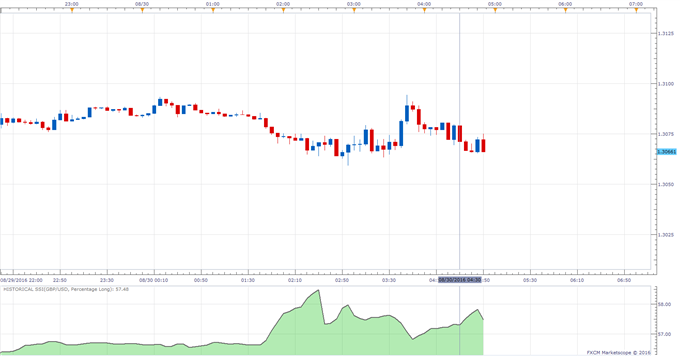 - GBP/USD was little changed on the news

The British Pound was little changed versus other major currencies after today's UK mortgages and credit data printed figures lower than expected.

It’s important to note that the release covers July, which means that it represents data one month post-Brexit.

Mortgage Approvals printed 60.91K in July versus the 61.9K expected, with the prior figure revised lower to 64.15K.

The figure marked that new mortgages approved for home purchases was at an 18-month low.

Net Lending Secured on Dwellings printed 2.7b vs 3.1b expected, with the prior figure revised down to 3.2b.

Net Consumer Credit (UK’s personal sector comprised from individuals only) slowed as well, printing 1.181b versus 1.70b expected, with a revised 1.857b prior print. This marked the lowest reading in nearly a year.

With that said, it remains to be seen how next month’s figures will look following the BOEs rat cut in August.

The latest Jobs reports and Retail Sales from the UK signaled that hard economic data has yet to suffer post Brexit, while inflation figures showed inflation rose sooner than expected.

With that said, different confidence surveys and today’s numbers point to a potential impact on confidence and demand for credit.

Interestingly, the data today was followed by Euro-Zone confidence numbers pointing to a deterioration in consumer confidence in August, potentially impacted by the Brexit vote, while the UK confidence survey rose.

Looking ahead, Thursday’s Markit PMI data from the UK could perhaps shed more light on the outlook post-Brexit.

The general low short term impact the figures have on the market, and the overall mixed bag of data from the UK might help to explain the limited response from the British Pound to the figures.

Meanwhile, the DailyFX Speculative Sentiment Index (SSI) is showing that about 57.4% of traders are long the GBP/USD at the time of writing, apparently trying to pick a bottom following Friday’s drop. The SSI is mainly used as a contrarian indicator, implying possible weakness ahead.