- August Preliminary Markit US Manufacturing PMI eases to 52.1 from 52.9 in July vs expections of 52.6

After growing at the fastest pace in 9 months in July, activity in the US Manufacturing sector slowed moderately in August but continued expanding at a healthy pace IHS Markit reported today.

The Market Research Group said that its Preliminary Manufacturing Purchasing Manager’s Index (PMI) edged slightly lower to 52.1 in August from 52.9 in July, boosted by gains in output but dampened by a moderation in employment and inventories. Analysts surveyed by Bloomberg had expected an increase to 52.6.

A level above 50 indicates expansion in the factory sector whereas a print below 50 implies contraction in the manufacturing economy.

Markit Chief Economist Chris Williamson commented: “The August drop in the PMI is a disappointment but less worrying when looked at in the context of July’s better than expected reading. Taking the July and August readings together suggests that manufacturing is enjoying its best growth so far thisyear in the third quarter, and should help drive stronger GDP growth”

Here’s a summary of the US data print: 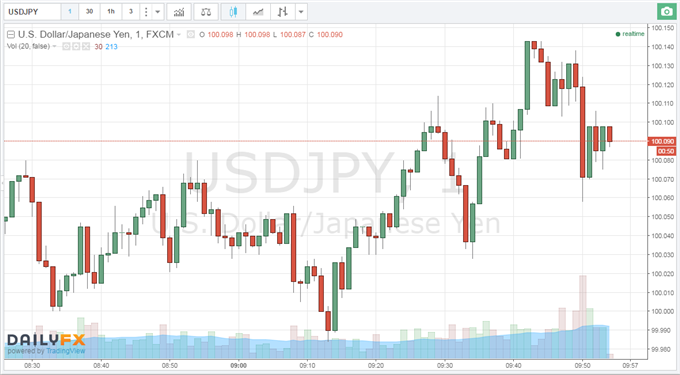 Immediately after the report, USD/JPY was trading at 100.10 from around 100.13 ahead of the release of the data. At the time this report was written, USD/JPY had settled around 100.08. The reaction was limited as the market remains focused on Fed Chair Janet Yellen speech on August 26 at the Federal Reserve Bank of Kansas City’s annual Economic Policy Symposium. There is skepticism whether Yellen will echo the hawkish views expressed by other policy makers recently or if she’ll take a more subdued and dovish tone. In any case, the speech may provide clues about the path of interest increases in the largest economy worldwide and whether a rate hike remains in play in 2016.